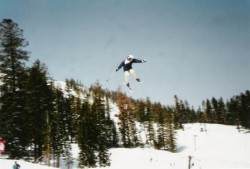 Skis Definitely Not on the Ground

When people get over the shock of the idea of walking from Mexico to Canada (or even half way), the very next question asked in a state of sheer unbelief is "You are not going alone are you?" I've learned to say "I'll be with several hundred people, so I will not be alone, but I will be by myself." That answer seems to prevent cardiac arrest.

The first thing most people think of is personal safety, like as in "are you packin?" Certainly safety is a concern. I'm actually a pretty conservative person. I don't rope climb and I keep my skis on the ground when skiing (unlike Anaiah). From years of shorter hikes, its pretty obvious that "trail" people have generally put alot of effort and planning into getting to the middle of no-where, many would rather be left alone, and they generally don't want to steal stuff so they can carry more weight. "Road" people, on the other hand, can be much scarier because driving takes no effort and no planning. I'm much more attentive to personal safety near roads. Oh, animals, yeah, let's see I've seen deer and a couple times I've seen bears running away faster than you can blink (except for the human-habituated in downtown Yosemite). Snakes, hum, yeah, I'll keep my eyes and ears open.

Then comes the topic of simply being alone. For the first weeks on the PCT that might be rare. Most people start around the same time and there will be a big bunch of people that slowly spreads out as people hike at their own speed. Based on our SoBo section hike last summer in the 1000-1100 mile segment, thru-hikers were still only 20-30 minutes apart from each other and they still seemed to be bunching up at campsites. It also seems like thru-hikers are considerably more sociable than the weekend backpackers, probably from spending more time alone.

Is being alone really scary? I've spent alot of time alone. Its easy to be alone in crowds or traveling where people don't speak much English. I don't actually ever feel like I'm alone. When I was nine, I stayed at my Mom's best friend's house for part of the summer. As a sort of going away present she gave me a very small Bible which fit in my back pocket (an ultralight version). After school I usually had a long wait for my ride home so I would sit and read it. To this day I remember the comforting feeling as if someone was there with me each afternoon as I read. That has continued off and on through life, generally less when there many distractions, or what I've come to call noise. Noise, ah, there is less of that on the trail.

Is being alone boring? On the PCT? In such beautiful country? Are you kidding? At least that's my experience in the Sierras. I don't have much desert hiking experience. SoCal will definitely be different, but I doubt it will be boring. People say NorCal, just past the half way point, is the hardest because the trail drops into the forest, diminishing the views. Guess I'll have to save that experience for another trip.