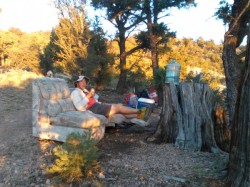 1000 lizards
Uphill on the southern side
Rattlesnake buzzes

I think I lost count at 877 but I'm sure there were at least 1000 lizards I saw today. Whether it was the heat or the prolific bugs they were after, I'm not sure. The day started with a gradual climb up Mission Creek valley. After a shaded rest at a trickle of a creek, there was more climbing. Steep climbing. And the dodge of the poodle dog brush. Poodle dog comes in after fires and high heat. Will give you the rash of the century apparently. Saggitar touched it before he realized so we'll see how he does.

During the climb I startled a large rattlesnake as much as he startled me. Maybe 10 buttons, an old timer. We eventually came to terms and parted ways. Next water stop was the last for 18 miles. Time to load up. And of course, more climbing. It ended up being over 4500 ft of climbing for the day.

The afternoon seemed to drag on and then I was able to receive messages from friends via Postholer and email. Power! Seriously people, messages give me so much power. So, thank you!

The miles flew by as my brain ran through the messages received. And then the cages appeared. The "sanctuary" where the animals featured in Hollywood films live. Let me tell you, these animals are not living in luxury like Hollywood stars. Metal cages stinking of excrement. Mercy. I purred at the tiger.

When the day started to seem bleak, there appeared the cache of chairs and soda. I propped up my feet and sucked down a mountain dew. Yes, a high fructose caffeine beverage. I flew down the trail until a mile later another cache appeared complete with a recliner. More high fructose corn syrup. Rotisserie and I decided on another 4 miles.

Juniper berries littered the trail as the orange sunset cast long shadows. We trucked into our camp near 9 pm with headlamps glowing. Several other hikers were already there. Team Winfrey plus others. 27 miles for the day. I lay here wide awake surely from the soda. I am held in this beautiful Junipers' arms listening to music for the first time in weeks. It's just me smiling, the stars, Katell and thoughts of you.