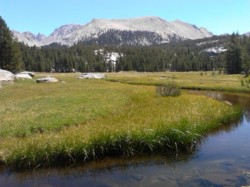 In The Shadow Of Mt. Whitney


A very cold morning in the bottom of the canyon. Mid to upper 30's. Managed to climb out of there and made easy miles to Crabtree Meadow where there were many PCT hikers preparing to depart for Mt. Whitney. I opted not to summit Mt. Whitney this time which is a 16 mile side trip from the trail. I just didn't feel the need as I'd already done it in 2009. Not only did I not plan food for it but my toes were happier with an easier day. At the last minute I sent a couple of my Journey Return trail cards up with other hikers and asked them to take a fun picture of the card on the summit. That's as close as I'll get this time. I did have the thought that it would have been pretty cool to call my dad from the summit, where there is cell service, to wish him a happy fathers day. Oh well. Next time.

I spent nearly 4 hours hanging at Crabtree Meadow which is such a beautiful spot and I think it was good for my toes. Saying I'm in the shadow of Mt. Whitney is a little misleading because you can't even see it from the trail. It's just a little "pimple" among a long range of peaks.

My afternoon 8 miles were awesome but a little lonely. The Bighorn Plateau was so cool because there were marmots everywhere. I got cool pictures and video. Also this afternoon were the first river fords but it is such a low water year that I didn't have to take off my shoes because I could rock hop the whole way across. For comparison, Tyndall Creek in 2009 came nearly up to my knees.

I thought I would be camped here alone tonight but a few other hikers have just rolled in.