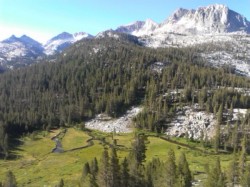 Mosquito madness
Passing the 900 mile mark
The sky's a rumblin'


Had to fight off the mosquitos to get packed up today. Finally broke down and put my headnet on. I wore it as we descended into the buggy Tully Hole. Ferocious.

Fairly easy trail today except for the climb out of Tully Hole. I had my pant legs on and long sleeve sun shirt to keep the bugs at bay but it was sunny and hot.

My allergies persist as it seems that spring is in full bloom in the Sierra. And my first two toes that lost skin seen to be improved but the third (the one previously infected) is not doing well and may have become infected again. Will see how it's doing in the morning.

This afternoon thunder clouds began to build and became dark. Luckily we were moving somewhat away from them as the thunder started to roll. We met lots of other hikers headed right for them. As the thunder clapped, we all waited for each other to cross the 900 mile mark together. Yeah! Also watched the terrain change from intrusive to extrusive igneous rocks. We are not far from volcanic Mammoth.

Had planned on another few miles but as the rain seemed imminent and we heard that our planned campsite was full of mosquitos we camped a few miles short aside an only somewhat buggy creek.

Snickers, Cherub, Soup Nazi and myself were all sitting together having dinner when humungous drops began to fall from the sky. You should have seen us scurry into our tents. The rain was short lived but we've been in our tents ever since. Given the close proximity of our tents we've been able to keep the chatter and joking going strong.