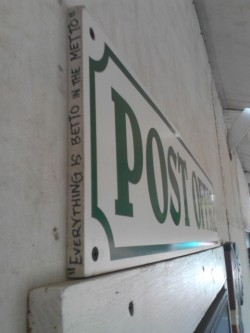 betto in the metto

Betto In The Metto


Powered up Donahue Pass (11,043 feet) only to be engulfed by mosquitos as I tried to eat a bar. Several marmots were watching with interest as I ran around while eating. One of 'em even thought I was too distracted to notice him approaching my backpack. Apparently he wanted a snack too.

The turbo boosters were on as I descended down into Lyell Valley. The call of burgers and beer was strong. I found Snickers taking a break by the river and after sitting a bit, we soon were speeding down the trail. Soup Nazi came up behind not long after. As the thunder clouds turned dark and started to rumble, a park ranger stopped us and asked us for our permits. The sprinkles started about a mile before the Tuolumne Meadows store/post office/grill.

I arrived to cheers from a big crew of hikers who were all huddled under the store awning. The beer and burgers were flowing. Then it was time for the post office. 3 packages. Food, backpack, socks. I exploded my pack and started making the switch. Minutes before closing I mailed out my broken backpack to Zpacks. The guys in the post office were totally awesome, one of which I remembered from a Yosemite video I'd seen. "Where everything is betto in the metto".

The large group of PCT hikers gathered in the hiker campground area. When I was at the store I asked them if there was a specific site number for hikers and they just said, go to the back of the campground. Hmmm..... Snickers came over from his campsite and started to tell about a rock he found at the bottom of his pack. I just walked over and gave him a big hug. I put the rock in his pack about 30 miles back. I was starting to wonder if he'd found it and hadn't said anything or if it was still deep in there and it was going to make it all the way to south lake Tahoe. A big crew sat around and laughed it up as Tree Killer recounted his time spent with the steamy harlequin romance novel that I originally got for G Dub. Apparently the hand off happened at Whitney and then Tree Killer put it in the hiker box at VVR. "Diamond In The Desert" is officially making the rounds through the PCT/JMT. Who would have guessed. Wink.