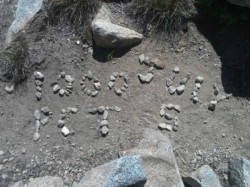 Late start at nearly 8 am. Spent what seemed like hours hiking through the longest meadow ever in the heat. Caught up with Snickers and Soup Nazi not far before the 1000 mile mark. Celebration and high fives all around. Only thing missing was Cherub. Turns out she didn't see the stones on the side of the trail and was waiting ahead at mile 1003. Also just before the 1000 mark I caught up with Sour Cream and his parents. I hadn't seen him since Idyllwild. A great reunion!

At my morning break with Snickers and Soup Nazi I said something about highway 395 going to Reno. Well, that was the straw that broke the camels back. We started talking about the buffet, and gambling and basically celebrating 1000 miles. This crazed plan has us hitching from Sonora Pass to Reno to party it up for a couple days. We'll see what happens.

Arrived in camp early which was real fun because we were all in good spirits. Passing the 1000 mile mark and dreams of buffets had us rolling out the humor. Man, you should have seen the food trading session that went down. I traded Snickers my chips ahoy and skittles for a mashed potato and ramen dinner. He even cooked it up for me and everything. It was a ton of food and I'm actually feeling full tonight. This is awesome as my hiker hunger has really started to kick in. Yesterday afternoon I ate a 420 calorie apple pie and an hour later my stomach was rumbling again.

A prefect day that ended with a rambunctious group hug among the four of us.