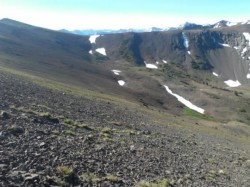 
Had a good climb ahead so I got up pretty early. I climbed into the windy, volcanic world of the Sierra crest. Did I mention the wind? OMG! Blowing me all over the trail, bringing me to a stand still, slapping me left and right. My sit pad even blew away but I threw down my pack and ran after it. Thanks to a few trees it stopped and I was able to catch up. Looked back at one point just in time to see Snickers and Soup Nazi glissading down the only patch of snow we passed in all of the Sierra. The hoots and hollers rang out. So much so that they did it twice.

I arrived at Sonora Pass about noon to find uncle jay with all sorts of goodies. 2011 pct hiker, Doc, who stayed with us last night had left camp even earlier than me was also there at the trail head. Uncle Jay broke out the chicken, salad, beer, grapes and apricots. He brought me my resupply, new shoes and insoles. Thank you angel Uncle Jay! The others rolled in soon after and Tree Killer too. It soon was silent as we all chowed down. And then out of the blue, Doc says if we want a ride to Reno we need to leave soon. No way! More hooting and hollering as we jumped into action. We zipped down the road and were in Reno within a couple hours.

We got a room at the Sands (because we think we're still in the desert?), took a shower and then hit the buffet. We tore that thing up. After 4 full plates and 2 dessert trips, the stomach started to signal full. Snickers went to gamble while the rest of us went back to the room to rest. It was after 9 pm and it seemed that we weren't going to make it out of bed, but we must have caught our second wind.