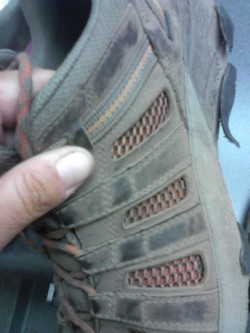 I had to sort through my boxes of goodies before we tried to hitch to South Lake Tahoe, where Cherub's cousin lives. I had to get my new shoes all setup too, complete with new insoles. Oh, they feel so good.

Had my leftover breakfast of half a hamburger, fries and one slice of pizza. Liquid chaser Icky IPA brewed in Reno. Finished that all off with a honey bun.

We took the free shuttle to the airport and tried to hitch from there. After an hour in the scorching sun we gave up on our efforts, went back into the airport and bought $ 30 tickets each on the shuttle to SLT. In the waiting area there was a singing cowboy with a bicycle and a bunch of gear. He rambled on from story to story slipping in a song wherever he could. The sign on his bicycle read, will sing for supper. After traveling about half the ride in silence, the cowboy started in again and Soup Nazi who was seated closest to him took the brunt of the nonstop talking.

Cherub's cousin Holly came and picked us up. She and Ben have a great place here in SLT. Eventually we went out and got some food for dinner. I even stopped at riteaid and got a prescription refill. BBQ corn, different meats, keBobs, salad, couscous. Yum!