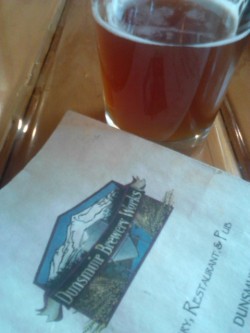 I really thought that I was going to zero today but decided I was feeling good and ready to head back to the trail. Was in my hotel room until 11 am and then headed to the Dunsmuir Brewery Works. The tunes were bumpin' (like another cool hangout I know) and I grabbed a seat at the bar. Had their ipa which had something funky going on with it but their barley legal barleywine was simply delightful. Had a burger and got in some reading before I left.

The library was the next stop for some computer time. I read an article about the fires. Some of their suggestions were:
Stay indoors and close all the windows.
Reduce physical activity

Great, the exact opposite of what I'm doing.

Next, I headed out to try my luck at hitching. As I started to think I might be there a while, a tow truck pulled over and I was back to the trail in no time.

I was on trail by 4 pm and made it to camp just after 8. When I started the hike the air was pretty clear but as I climbed into a valley it began to fill with smoke. Lots of smoke. I was thinking of Canadoug and how he would stop every 800 feet of climbing for a cigar break. No need this time as the air is clogged enough. Camped here tonight with Saggitar, bird dog, acid glasses, Verde and leaky.