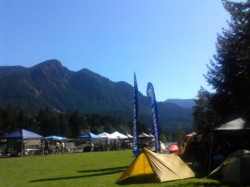 Another lazy morning. Still had some things to do to get my backpack all ready. You see, I've sent my Zpacks off to them again and I'm back to using my osprey exos 46, adding 20 ounces. I just have been unable to keep the metal stays bent despite my attempts at making modifications. I transferred my hip belt pockets to the osprey but that required sewing a broken strap first. Other gear changes include switching out my Tyvek rain jacket for my rei rain jacket, adding 9 ounces. I've switched out my gossamer gear poly ground cloth for the actual big agnes footprint for my tent, adding maybe 2 ounces. So, I've added at least 2 lbs to my base weight. Ouch.

After checking out of the motel, I went to the diner where I wrote some postcards and sent some emails. Cherub showed up too and skyped with here sister in South Africa. We had lunch and then went over to trail days on thunder island in cascade locks. Made the loop through and saw lots of hikers. Ran into Fireweed and she bought me a beer. Thank you angel Fireweed!

I eventually made my way to the Bridge of the Gods which I walked across into Washington. I dodged the cars as I captured pictures from both sides of the bridge.

Instead of making a left towards the trail I turned right. Walking Man Brewery was my destination in Stevenson, 3 miles down the road. The hitch didn't take too long and I was soon sitting at the brewery. I started chatting with a group of friends from Portland. They were curious about the trail and we all had a great conversation as I sipped a pint of homo erectus imperial ipa. They offered me a ride to Carson which was down the road a few miles and in the direction I was headed. I gladly accepted and the 5 of us squeezed into the car. Before I knew it they were driving me all the way to panther creek campground. I netted hugs as we parted ways. Thank you so much my sweet angels for the ride and the beer and the offer of future Portland fun!

I met the host Gary of the campground and he told me about a spot on the trail where I could camp. I headed off into the forest and found it. I set up camp and realized that I'd forgotten to mail my postcards. I thought maybe the camp host might be able to mail them for me so I went back over there. I got talking to host Sally and friend Lisa and pretty soon they'd invited me to dinner. What an amazing dinner of Thai chicken with veggies and coconut peanut butter sauce. They even sent me back into the forest with left overs. Thank you angels Gary, Sally and Lisa.

A day filled with angels!