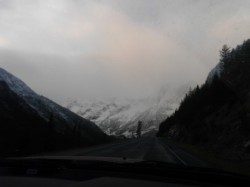 headed up on hwy 20 to rainy pass

The crew, Toots, Tears, Fun Size, Cuddles, Lighthouse, Atlas, Delightful, all had an early departure planned from Rainy Pass. Canadoug and I were out front by 6:30am to say goodbye to them. After a little hanging around and a stop at the coffee shop, we decided to head up to Rainy Pass as well. We got word that there were other hikers, Sunshine, Sneaks, Wacka Wacka, Giddy Up, Bramble, Kazu near Mazama and needing a ride to the pass. So we headed out.

Arrival at Rainy Pass showed new snow and it was snowing lightly. Midnight Rider and Valentino were there too, planning to ride to Hart's Pass today. After a group photo and some amazing Tree Killer cheesecake, the hikers headed out in their groups. On the ride up, Canadoug was saying that he'd also like to drive up to Hart's Pass. Aloha, Laura and Dishcloth were planning to get up there tomorrow to trail magic the group as they came through the pass. So, they all left their cars at Mazama and piled into Canadoug's stellar truck. It was a fun, bumpy ride and we found 6 inches of snow at the pass. It was so beautiful. Canadoug was getting into the idea too because he has all the gear to set up a trail magic spot. Aloha decided to fix chili and then we were going to have coffee, hot chocolate, hot cider.

After hanging out with Cherub, I headed over to the hostel to help with the chili making. The North Cascades Mountain Hostel was kind enough to let us use their kitchen. Aubrey and Paul are the owners and are such wonderful people. As the chili was getting to its sweet spot, Laura got a call from Fun Size. Turns out they had turned around after 6 miles due to chest high snow. They were hitching back into town so Aloha and Laura went out immediately to get them. Guess we're having chili tonight instead. Midnight Rider also turned around because the snow was up to Valentino's chest and he was kneeling down in the snow due to exhaustion.

After the group ate some chili, we gathered at the saloon where new plans started emerging. I think folks are leaning towards the road walk/ross lake low route now with some just focused on the border and others wanting to eventually get to the monument. Lots of tears, drama and hard decisions. I still am focused on getting to Manning Park and walking into the border. Perhaps Thursday will be my day.