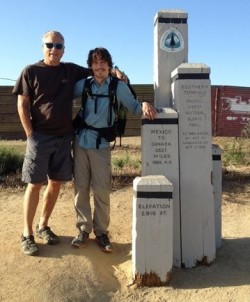 Day one was grueling. It started out nice with Dad and Tina driving me down to the border. I was so thankful to have my dad there to help me get my head in the right place to start this journey and to have him see me off. I will always think of backpacking as a family activity, so it was nice to have my mom (who is mailing me resupply packages) and dad be an active part of this trip. After taking pictures at the southern terminus, my dad hiked with me for about the first mile, and then I was off. I started with six liters of water, to get me all the way to Lake Morena, and five days of food, which was going to last me all the way to Warner Springs at mile 109. Six liters of water is about 13 pounds, and my five days of food weighed about 10. So with a base weight of around 16 pounds, I weighed in close to 39 pounds, which is entirely too much weight to start off with. Little did I know that I had a hot day with a fair amount of elevation gain and loss.

Hiking in the desert (technically "coastal chaparral") is far from my favorite environment. The trails were covered in cobbles and there was little to no shade. In addition the limited water and signs in Spanish warning illegal immigrants not to lose their lives to the elements was offputting. The cobbles became a problem with the Merrell Barefoots I was wearing because there is little to no cushion in the soles. It was either this day, or the next that I bruised a tarsal pretty bad by stomping on a rock on a downhill slope. I learned quickly to pay attention to where I was stepping.

Hiking alone for ten hours a day gives your mind a lot of time to wander. It has been a long time since I've had the time to do that. That day I mainly thought about all the people in my life that I love, about why I was out here hiking in heat with no water around, and whether I can really hike all the way to Canada. What a rediculous idea! On the trail I met Otter and Jamie. I had a chance to chat with Jamie for a while. She quit her job and is fully supported by her husband. We talked about him a bit, and he sounds like a good guy. We were both thankful for all of the support we were finding from those we were leaving behind.

When I arrived at Lake Morena, I bee lined to the showers to try and lower my bodyheat. I was dehydrated and hot! I met Gazelle and Squatch, who invited me to join the Anderson's camp for dinner and a party. Even though I wasn't feeling incredibly social, I decided to accept. That night I ate a couple bowls of chili (not a GREAT idea in retrospect) and passed out right after. No partying for me.

I also learned that wearing orange tinted sunglasses makes the desert look like a horridly unhospitable place. I'm thinking that Day One will be one of the hardest days on the trail.