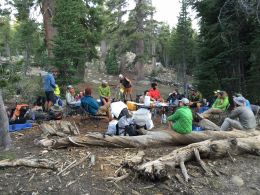 Preparing for our Trinity Alps trek with trail Magic

Preparing for our Trinity Alps trek with trail Magic

After a short stop at the Whoa Nellie Deli, at the crossroads of Highways 120 and 395, where we each enjoyed a delicious swordfish sandwich, we turned north and followed a winding set of highways and 1.5
lane roads to Highway 4, we slowly wound our way upwards to Ebbett's Pass. In 2013 Two Step and I crossed this pass in a cold and driving wind and rain storm that was unusual for that time of year. We were unprepared for two days of rain, we would not get heavy rain gear until we reached Washington. When we crossed Highway 4 that year we were so miserable that had a car come by, we would have begged a ride to any shelter. Alas, no ride appeared and we trudged forward. However, I eventually promised myself that I would come back and provide food and drink, "trail magic", to brighten the day of some future PCT hiker. Today was to be that day!

Getting ready for the Trinity Alps,
Split and Two Step

Split And Two Step Northward Bound On The PCT