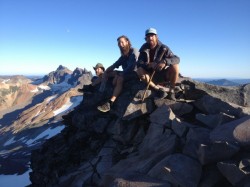 Pacific North West... There be weather a brewing.

Well well well, there is about 30 of us hikers all bundled together lounging on over stuffed leather couches in the hotel at Snoqualmie pass. HIKER EXPLOSION! It's hard to believe we've made it here? Looking at the maps, we have about 250 miles left. That's it.... This grand escapade is quickly coming to a close. Maybe this is for the better? The weather has started a brewing Pacific Northwest style. The rainy mornings have surpassed a handful. Puffy coats are now worn during hiking. It's gray, good ol' gray, with uncanny blue sky days on occasion. Vitamin D deficiency begin haha.

With that all in mind, there has been a serious roll of good times recently. It all began at Timberline Lodge. This place in the summer is relaxation station. Definitely need to head back there again one of these days.

Pan's parents are wondrous! They got a bunk room with 8 beds in it for a wad of us for a night. We ended up with about 12 of us squashed in there. Showers galore, hot tub, pool, sauna and the most incredible buffet breakfast in the world. No one will forget that ultra heavy whipped cream, sprinkled with rock sugar, that we doused our individually made waffles with. Killing it tsunami group. Captain, Top Shelf, Wee Viking, Don Quixote, Bard, Don Creosote, Fun Size, Dr. Chip, Che, Pan, Magic Stick, Happy Feet, Smuggles, and Shamiko. Chillin' like Villians. Also, while we were there, Gypsy Town made this lady's day by staging a photo with her allowing the dream of being stolen by a band of gypsies to finally come true. She grabbed 7 of us a round of tequila in thanks, haha oh the magic.

After Timberline came another glorious hiker party thanks to Pan. 3 of her friends drove from Montana out to meet us at Panther Creek. Pounds of potatoes, bacon, beets, and burger meat later... Along with cans galore... One of the wildestly spread gathering rumors of the trail came to be. GRATZI to Conrad... Banchi... Molly and Morgan. Immediately post this shin-dig came one of the longest and steepest ongoing climbs we've done yet.... Ya Momma Nature, laying down the law.

We made it to Casade Locks!!! We were there just in time to catch the last Seahawks preseason game. After a night there, we got to walk across the Bridge of the Gods. PCT'ers are the only ones allowed to shimmy across this two lane expanse. The wind was booming, the cars were flying. And next thing we knew, we arrived in WASHINGTON!!! Home sweet home!

We were magicked with a glorious savory spread right at the edge of a place called Indian Heaven. Che and I quite literally ran 4 miles in order to catch this group. They were a Portland hiking group magicking in Washington low and behold. Spare ribs, sundaes, burgers, quesadillas, fruit, veggies, donuts, surprise after surprise after surprise. These people were a hoot, and man did they take good care of our crowd as we tootled on through. Many could hardly walk after this chiller. Big bellies!!!

Then came Trout Lake. This is a quant small town with the best down home cafe ever. Apple pie big slice, burgers, milk shakes, and all the bits and pieces. We gorged, played checkers, tether ball, and badminton in their hiker super friendly yard, and met the afternoon hunting crew as they came in for lunch in camo and face paint galore. Later, a older couple by the name of Paul and Monica became trail angles for the first time ever there. They took 25 of us into their riverside mansion spread. We had a massive hiker circle with them on their front porch, a dance party in the craft room, and fresh baked muffins with coffee courtesy of mama Monica in the morning. Nuff said. Holy Guacamole. Props to Neon... Vwhat a magical Yogi. The things that happen when you just ask?

Some trail talk... The Goat Rocks Wilderness is AMAZING!!! It was like being in be High Sierra all over again. Honestly, this one ridge called the knifes put me on edge more then anything we'd tromped through yet. Ridiculously steep shaley cliffs, Mt, Rainier, and the reappearance of snow once again. BAMB! Che, Captain, Indiana Jones, Magic Stick, and I ravaged through this place in style. What a crew, being with these guys was probably my favorite hiking crew we've had all trail. Space age conversations, peak bagging, and speed racing.

Leaving this epic piece of trail we found Coach at White Pass doing further trail magic. Burgers, spaghetti, and to die for brownies... He was a thru-hiker this year paying it forward post hike just right. Best of all, we found Nigel!!! He is now affectionately named McButters. We spent our first day out of he San Diego airport with him at Bob Reiss's house preparing for the trail. After day 2 on trail we hadn't seen him since. Reunion of be best kind, YES! We'd thought he'd fallen of the face of the earth never to be found again.

Since this we have covered 100 miles. It's been Loy's and lots of up and down. Washington don't joke around!!!! We stayed round a cabin of historic significance. Life's been good. Magic Stick got nasty respiratory sick but is quickly in be mend. We have arrived at Snoqualmie with the magic help of Not Phil's Dad, we all nearly ran out of food. It's cold, misty, and the mountain look craggy as ever. Canada is within our near future. Last legs and we've made it hey hey!