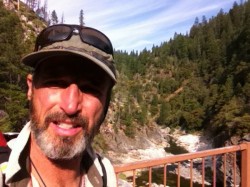 As noted, slept on a fire road last night.(as it truned out, this would be my last night in a tent on this PCT section hike) Homegirl, as always, left camp earlier than I. Around 40 minutes ahead today. I am always awake when she breaks camp. I sit up and usually watch her move North on the trail knowing that I will catch up with her sometime between noon and 5:30pm. I then will lay back down and get about 20 minutes of slept over the next hour. It is nice and relaxing walking alone on the trail. Trail is usually single track and the dust is kicked up so that you usually have to keep space beteween hikers. This is usually just out of conversation range. Solo hiking allows you to be alone with your thoughts and natue. However,it is comforting knowing that a freindly face and great camp talk awaits at the end of the day. Homegirl is the perfect hiking companion.

I broke camp, cleared the logs from the road and filled up with water. The goal was to hike to mile 1265 todayy, at mile 1263, I came across a sign (pic) for Honkers Pass at Lookout rock. This turned out to be a gorgeous cabin owned by Terry and Nancy williams. Could not have been nicer. The sign said to walk a bit further to Lookout rock and then call Nancy if you needed a ride to their place or if you needed anything. I still had not caught up with Homegirl and it was getting late in the afternoon. I called Nancy and she said she would meet me in 20 minutes..

Between the time I called Nancy and walked the mile+ to the road, a gentleman named Stringbean approached me from behind. SB was going for the PCT supported speed record (turns out he did it). Tall, young and carrying nothing more than a light shoulder pack, SB was cruising at 50 miles per day. His goal today was 54. After moving introductions I wished hime well on his trek. However, he wanted to chat up most all hikers on his way. So we talked about his sponsers, support crew, etc. We parted just before the road where I was to meet Nancy Williams. Really nice guy. (I later met him at PCT Days in September in Cascade Locks). He was a memebr of the Boston College cross country team and I assume his support included past or present team memebers. He was receiving food, liquids and massages from his crew every day. He had had no serious injuries and was in great spirits. He discussed the assistance he received from New Balance in the form of shoes and clothing. He did not mention other sponsers.

Back to Honkers. Nancy took me to their home. I asked about Homegirl but noone had seen her. I told Nancy about Sringbean and she was instantly excited. Apparently, she had been somewhat following his adventure on the net a presume, I just had to meet him. She packaged up some homemade goodies and wen to meet him at a trailhead I had told her about. Elizabeth(previously mentioned. We first met at Mommoth Hostel) and Curry(a solo FM hiker from Hawaii) were at the cabin The cabin was huge and set at the border of Honkers meadow. Very remote and a huge place. They had a seperate building connected to the deck at the same level that had laundry facilities, shower and one room with a bed that was also a storage place for any and all hiker essentials. The stockpile of donated and furnished supplies was uncredible. They had shelves of clothes to wear while your hiker clothes were in the wash.
A few minutes and 2 beers into my stay, Homegirl comes walking in with a smile from ear-to-ear saying to me " I knew you would stop here". We hugeed and talked about the last few miles to this point.
Eleizabeth, having completed her laundry and shower, repacked her pack and moved on. Ever since the night when she camped with Homegirl and I, Elizabeth has not been very socail to us. As previously noted, Elizabeth campoed with us just out of Sierra City and became scared of the animals passing through our camp on their way to nearby water. She was up all nite with a flashlite on. Perhaps she was embarassed by this and was not comfortable with us knowing and possibly telling of it to others. "Eleizabeth, if you ever read this journal, your fear is just part of the trail experience and everyone experiences some sort of fear during their journey. NO onejudges you by it. MY only regret is not giving you the trail name of "Night Lite".!! Peace!

Rorsack(Previously mentioned) and Vocal eventually arrived. Vocal arrived just after dinner but there was plenty of food remaining. We were served, yes, served, by the William's niece and her friend.
So 5 hikers enjoyed tri-tip steak, cucumbers, zuchini, other vegies for dinner. The William's own a 500 acres of rice field and walnut orchards near Oraville, CA. They have the luxury of a low-key lifestyle and are moved to provide some luxury to PCT hikers. After dinner include more beer and some Johnny Walker Red whiskey. 4 of us slept on the deck. It was a clear and beautiful night. Temperatures dipped but we all remained comfortable. Homegirl took the lone bed in the bunkhouse. A specail day and night on the PCT ends in a great nights sleep.

Rattlesnake:Near mile 1248 (9am) I was descending down a trail towards bear Creek. The trail was tree lined and the forest was covered by leaves. I as do not hike with headphones, I am subject and witness to all sounds. During the descent, I hear the unmistakeable sound of a rattle. Note, I have never seen a rattlesnake on the trail and did not expect to see one inn this environment. Apparently, Mr S had been on my uphill side heading downhil to some water or food or both. Obviously, S was preparing to cross the trail when I appeared and moved in front of his pathe. he immediately coiled, I heard the leaves and then the rattle. As the hair continued to rise on all parts of my body, I scanned franitcally in the direction of the sound. My additional fear was that it may be very close (within striking range) and was very large. Neither was true. I found the snake coiled on the uphill side about 10-15 ft from me at 4 oclock. I had passed him, startled him (I startled him????)and he went into defense mode. His demeaner said, " Look, I'm right here and if you come close enough to me I will mess up your entire day, week, month, etc. Just move on your way and I'll move on mine and no body gets hurt...capish??) Of course, I didnt move on. I pulled my camera and started the video. He released from coil position and headed towards me then veered left and did a pependicular crossing of the trail, headed downhill, and we parted ways. Unfortunately, I attempted to change from video to photo on my Iphone. However, in the process the video was canceled. I did manage to get 2 pics of this beautiful but dangerous reptile. Note: Never, ever shall I hike with headphones. EVER!!
Deer- Cougar: at mile 1257 just a few hours after I met Mr.S, I experienced the most fascinating and fearful event to date. Ill set this up. Im walking on the trail and there is a slight downhill covered in low brush on my left and an uphill covred with bush on the right. As im walking, still thinking about Mr S and keeping by eyes and ears peeled for his like, I spook a deer that had been laying in the brush on the downhill side. The deer is maybe 10-15 ft on my right. He and pops up and lumbers a few yards and stares back at me (so I thought). I'm now taking photos and taking to the deer, whistling and making strange sounds to see the reaction. He would perk up, wiggle its ears and then revert to feeding. I then start pawing and the ground on the trail, similar to that of a bull preparing for charge. Suddenly, about 10-15 ft to my right (uphill side) I hear a commotion and see a cougar's ass dart out from the brush and sprint off to the North, away from me and the deer. At first, this event did not sink in. I first thought that this was pretty cool seeing a deer and then a cougar this close and at the same time. Then it hit me! My mind quickly went through 2 scenarios: 1) Was the Cougar hunting the deer only to be disengaged once I came down the trail in between him and his prey...or 2) was the cougar stalking me and decided that a skinny, smelly prey making weird, unnatural whistles, and movements was just not what he had in mind for dinner today!. OMG! What just happened! One other scenario is that the cougar didnt notice the deer until I spooked it up and then could not decide on either me or the deer. All I know is that the cougars hind quarters were large and total muscle. He sprinted away with such power, speed and purpose that it was apparent who is on top of the food chain here.