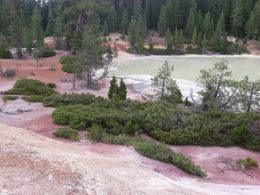 After a fine day in Chester, we got back on the trail and really started
clicking through the miles. Before we knew it, we were in Lassen National
Park, the southernmost Cascade volcano. The park is beautiful, and full of
geothermal activity. That wasn't the only heat, though. We've been
struggling, still, with temperatures in the 90s. That is just too hot to be
hiking. Lots of breaks, naps and post dinner miles certainly help.
At one point in the park we took the time to go down a side trail to a
steam vent, and were lucky enough to find a creek that was warmed by some
natural hot springs. Ahh, soaking our feet in a stream has become a
treasured pleasure, and to find water that was almost too hot to put your
feet into was like Christmas!
After we returned to the trail, we were commenting on the building
thunderstorm to the east of us when all of a sudden I saw Marce's face
light up with light. At the same moment, the boom of thunder rolled through
us. Apparently, Marce saw the actual bolt of lightning hit about 100 yards
from us, just over my shoulder. We got into a ditch until we realized that
the storm was still well off us and that one bolt was an isolated strike.
Good news is that we had a choice of trails there so we took the lower
route to make sure we were safe.
As we hiked well below the ridgeline, we started to smell smoke and
verbally discussed our escape drills. (Mom, don't worry, we were never in
danger and Marce and I are just hyper prudent, so we constantly drill for
things that just aren't going to happen.) The good news is that a hiker
behind us was able to get cell service so he called the fire in. The local
helo instantly arrived on scene and kept the fire to less than an acre.
Later that same day, we were walking through the fringe of a campground
when a clearly retired and loving it couple called out a hello to us. We
got to chatting with them and it turns out that they had just sold their 5
star Tahoe based restaurant. They specialized in creative cocktails and
really wanted us to sit down and join them, but we still had about 10 miles
to hike that day. I was pretty sure that one sip of a cocktail would lead
to about 75 more sips, and the next thing you know, we move into their
trailer and let them adopt us. So, we declined, but we did let them make us
a "to go" drink in a water bottle, which we shared with another hiker at
the end of the day. Recipe: Dripping Springs Vodka, Cointreau, and organic
pink lemonade. Google Dripping Springs Vodka, by the way.
Anyway, we continued north, wait, scratch that, we continued on the trail
that meandered north, south, east and west as we work our way through the
mountains. One area we were dreading meandering through was the Hat Creek
Escarpment. Go ahead and Google that. I'll wait, go ahead. You will note
that the description immediately follows Africa and precedes Hell, which is
appropriate. And as luck would have it, we traversed the rim on a day which
set records for heat. Over a hundred degrees, which doesn't sound too hot
to some of our relatives, but our Seattle peeps can appreciate how awful
that is. And, to add to that, there is no shade and no natural water
sources for 30 miles. But, remember my post about trail angels? Well they
truly saved our butts this day and we found 4 separate water caches. These
folks are true angels and don't want anything from the hikers that they are
helping. Marce and I can't wait to pay it forward and set up something in
the Snoqualmie Pass area.
After we left Africa, the hills became shaded by pines and therefore much
cooler. But the PCT giveth and the PCT taketh away. Cooler? Sure. More
hills? Oh, you betcha! But, these bad assess aren't about to let many
thousands of feet of elevation gain and loss slow them down! Well, maybe
just a little slow down. After over a week of marathon length days, we
found that we needed a small break, just enough to elevate the shins, rest
the hips, eat a salad and maybe have a beer or three.
So, after crossing over the 1500 mile mark yesterday, we decided to plop
down in the quaint little mountain town of Mount Shasta for a day of rest.
And who should show up? Our Seattle buddies Mark and Bailey! Such a great
unexpected moment.
Tomorrow puts us back out on the trail, and we should cross into Oregon
before the month of July ends. There are multiple fires across the trail in
central and northern Oregon, and in Washington, too, so we are keeping a
close eye on the PCTA website for closures and reroutes. More information
on that in later posts.
In the meantime, we both wish everyone a continued safe and happy summer.
Happy trails!
Jill and Marce (Port & Starboard)