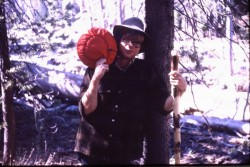 This is where it begins, I guess.
Well, really it began years ago in Yosemite. A high school buddy and I drove up to The Valley the summer after our 2nd year of college for a 3 day trek in the high country. We were living in San Francisco and it was 1970. A book called "On The Loose" had just come out giving root to the idea that walking off into the wilderness was somehow transcendent and we had gone for it hook, line, and sinker. Driving up to the Sierras in Bill's blue VW Bug singing Yellow Submarine at the top of our lungs, we were giddy with anticipation.
The Valley was a magnificent rift in the surrounding snow capped peak and each curve provided a more spectacular view than the last. More than once we almost drove off the road gawking as we made our way to the trailhead. I was relieved when we finally pulled into the empty parking lot safe and sound.
So there we were, two neophytes, heading into the woods. I had been in the Boy Scouts, so I was pretty sure (mistakenly) I knew what I was doing and Bill, well Bill had never been camping a day in his life. Anyway, as I recall, we set out from Glacier Point. It was early June. I don't remember the route, but I do remember the streams were raging torrents, the mosquitoes were ferocious, the packs were way too heavy, the nights were bitter cold, and the snow was deep and ultimately forced us to turn back. But, I also remember that I had never felt so alive in all my life. There was a great sense of accomplishment negotiating a river crossing, making a fire and cooking, even getting our canvas tent pitched in the dark. The mountains, the sky, and the snow conspired to create a spectacular backdrop to our trek. Somehow a light came on and I realized that all the achievements and adventures I had had to that point paled in comparison.
The amazing thing was that we didn't get eaten by bears, or drown in the river crossings, nor lose digits to the numbing cold. In fact, flawed as it was, our experience was not particularly extraordinary, but somehow it lit a fire in me that continues to burn to this day. In the intervening time I have had many more achievements and adventures. Some even rivaling that Yosemite experience, but none surpassing it. So, as I wind down from my career, I look forward to revisiting the Sierras and all that is along the PCT.
-Mark
P.S. I don't think Bill had quite the same transcendent experience. I saw him a couple more times after that summer, but ultimately our paths diverged and we lost track of each other. ' Wonder what ever happened to him...