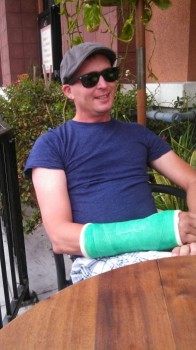 I was ready to hit the trail this year, when my doctor suddenly informs me i needed surgery on my wrist. This of course was a point of conflict for me. At first i was gonna put it off until now-(september 2013) then it occured to me the recovery time would interfere with TWO hiking seasons. Thankfully, i was just released from occupational therapy and am nearly healed. By the time April 1, 2014 rolls around, i should be fully recovered and ready to hike.

These past two hikes have been challenging to me in so many ways, both times having to face demons, and realities that caused me to leave the trail early both times. I hope to have made peace with myself enough now, and have tackled the issues which brought me home, so that i can make it further this time than before.

When i planned for the 2013 hike(which never happened) i sold myself a bill of goods that basically, i was never gonna be capable of completing a thru-hike and I had resigned myself to the prospect of only section hiking.

Well, im not ready to give in to my own brand of thinking!!

Im starting April 1,2014 from warner springs. ( hiking section A in december, then again in March)

The truly simple life exists within the zippers of my backpack,powered by my own legs, burning only natural fuel, leaving no trace I was ever there.