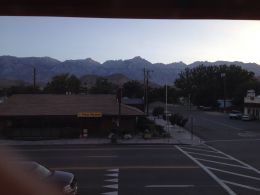 Not really a hiking day, as all I had to do was hitchhike from Lone Pine to Mammoth Lakes airport to catch my flight to LAX and on to PDX.

So, I had breakfast at the Alabama Hills Cafe, and got a chicken wrap to-go for lunch. Dropped off my knife and Esbit tabs at the post office, and hit the road. After maybe 15 minutes, a truck stopped to give me a ride. Ben said he was only going as far as Independence, but it's further up the road, so I got in.

At Independence, Ben stopped at a friend, Ian, and said Ian might take me as far as Bishop. I went back to the road, and told Ben that Ian could pick me up if I didn't gey a ride by the time they were ready.

Turns out I was still by the side of the road when Ian and Ben were ready to drive on to Bishop, and they picked me up. The reason for their trip is that groceries are so expensive in Lone Pine that it is worth the time and money to drive to Bishop for groceries. So off we went.

By the time we got to Bishop, Ian decided it would be fun to drive on up to Mammoth to visit the brewery and have lunch. We were at Mammoth by 11AM, 5.5 hours before my flight. They invited me to join them for lunch, so we went on into Mammoth Lakes.

Turns out that Isn and Ben both work for a company working on an interesting project in Owens Lake. Owen Lake was a huge lake in Owens Valley until 1924, when Los Angeles diverted most of its water sources (into the aqueduct I walked along for ten miles), and the lake dried up. The 1974 movie "Chinatown" is about how LA secured the water rights to this eastern California lake. However, since the lake has dried up, winds whipping up dust from the lake bed have created the largest single source of dust pollution in the U.S. So, now this company Ian and Ben work for has an enormous mega-million dollar contract to establish a network of sprinkler systems across the lake bed to mitigate dust pollution! Wow, watering a lake bed sucked dry by LA!

Anyway, we went on to Mammoth Lakes. We did a tasting at the Mammoth brewery, had lunch at a local restaurant, another round of beers at another restaurant, and then off to a hot spring! When I was here in 2010, a local I met had drawn up for me a map of local hot springs. I had brought the map in the remote chance I would have a chance to use it. And use it I did. Off we went and soaked in the Rock Tub. It was great! Then they dropped me off at the airport. What a great day, and what a great hitch!