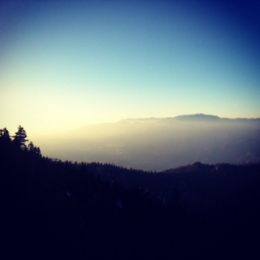 Tough stretch wrapped up over the past few days, very glad to be in Big Bear.

I started out in Idyllwild, a small mountain town on the southwest side of Mt San Jacinto. I'd dub it the Bethel of Southern California for the Mainer in me, it's a great little town with good food and very hiker friendly people. Big thanks to Tangent and Holstein for putting me up for two nights, best night of sleep I've gotten yet.

From Idyllwild I summited San Jacinto, which has an unbelievable view down to the desert floor. The Salton Sea is out to the east and the LA basin to the west, with the San Bernadinos across the San Gorgonio pass.

From the peak we saw the longest descent followed by the longest ascent of the entire trail. 25 miles down over 9000 feet. On my way down I had my first rattlesnake encounter on a ledge, nearly jumped out of my pants when I startled it.

Once we got down to the desert floor there was a 7 mile flat that crossed I-10 (main highway from LA to Phoenix). Crossing the flat was a bit of an adventure, we checked the weather report that night and we were apparently dealing with 50-60mph gusts. At one point I was knocked sideways off my feet by a gust, it makes sense that there are so many wind turbines in the pass. The wind lasted through the night, I think my ears are still ringing.

After the descent, we crossed into the San Bernadino National Forest and began a 30 mile, 7500 foot ascent to Big Bear. The climb was beautiful, it started in desert conditions and ended in pine forests at the foot of Mt San Gorgonio, which still has quite a bit of snow.

The descent and climb definitely took a physical toll, and it's very nice to get a shower and some hamburgers in Big Bear.

I also got a trail name from the infamous Teddi Boston: Maine-iac. As I mentioned before, Teddi was the first woman to solo hike the PCT back in '77. She's now 87 years old and is section hiking Southern California with her family. She heard I was from Maine, and has been calling me Maine-iac ever since. The name has caught on, I just hope other hikers don't think I'm a serial killer.

The hiker hunger is full blown at this point, I feel like a two legged locust. No restaurant from here to Canada is safe.

On to Cajon Pass, should be about 4 days!