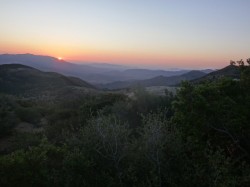 We woke up early, before it got light. This morning had a great start, heading out into the dim light of 5:30 with a little assistance from our headlamps.

The day heated up quickly and by the time we had made it to the Sunrise Trailhead at 9 AM we were already wishing for a little shade. Thoughtful hikers and trail angels had hauled some gallons of water out to the trail from the water source 3/4 of a mile away. We filtered water and ate breakfast in a bit of partial shade from a nearby bush. Out next water source and break would be miles ahead at the Rodriguez Truck Trail. As we moved down the trail it seemed to go on forever. We headed down a steep grade to the bottom of Chariot Canyon, a popular spot for gold prospecting further down the canyon. We spotted an SUV down at the bottom and wondered who is was - perhaps a trail angel? As we came down the trail we heard a few small gunshots, apparently hunters or campers enjoying some target practice.

When we got down to the bottom, we were excited to see Topo. She told us that Sweet Spot was further ahead of us. Topo herself had just finished up a rest in the shade. We hung out with the campers who were amazed by the number of hikers coming down the trail. Apparently this was one of the camper's secret spot and he had never seen so many people on the trail - 10 so far today. The trail seems a lot less crowded when you are moving with the flow apparently. The campers gave us water and then brought out some smoked salmon and a bit of filet mignon that they had smoked the night before. Tpo, Natalia and I went through the fish easily, flaking off chunks with our fingers. It was delicious and we thanked the campers before we were on our way.

It was a tough, hot climb out of Chariot Canyon with Topo just behind us. As we had arrived, we had watched Mr. Cup climbing out. We moved slowly, creating our own shade with our Chrome Domes. Still, when we looked back a while later, there was no sign of Topo. We hoped that she was doing well.

We arrived at Rodriguez Truck Trail at about 12:30 and collapsed exhausted into a tiny, sloping patch of shade next to Sweet Spot. It had been a tough day so far, but we had covered a lot of ground. A couple more miles and we'd be close enough to hit the dreaded Scissors Crossing before it got hot the next day. It was no consolation to Natalia who simply wanted a cool patch of shade to nap in. She searched around and found a tiny spot under a bush that was better than nothing. We moved out gear in and popped open the Chrome Domes to try to enhance the shade. Our long awaited nap was less than successful. Natalia was overwhelmed by the heat and declared that she wanted to go home. There wasn't much to say. The heat wasn't going to get better and all you could do was try your best to fall asleep for a bit. Hot and frustrated inside a thinly leaved bush, I hoped that Natalia's mind would change with her mood. It's best to just give her some encouragement and let her sort it out in her own mind I supposed.

The plan was to leave around 4, so around 3 I started working on our meal. The sun was lower in the sky and I found a new spot of shade cast by the concrete water tank. The tyvek ground sheet went out, followed by rocks to keep it in place and the stove and meals. I boiled water and started our meals cooking - today's meal was black bean soup. When Natalia got back to camp from chatting, I introduced her to our new "restaurant" that even had air conditioning. When you put your back against the cistern, the cool concrete and breeze helped wick away the heat.

When we finished up dinner, I let Sweet Spot know that we were planning on leaving around 4. It ended up taking us longer to pack up and filter water, so Sweet Spot headed out ahead of us. We eventually hit the trail again at 4:30.

I let Natalia in on a plan I had hatched earlier that day. What if we kept hiking that night all the way to Scissors Crossing? We had already covered 12 miles and 9 more would take us to the crossing where we could sleep under the bridge. It would put us almost a full day ahead - one more day in town for Natalia. I told Natalia to think about it and we decided to hike to the spot where we had planned on camping and see how we felt.

As we moved along the gentle downslope, we caught up with Sweet Spot. She joined up with us and together we decided to make it to Scissors Crossing that night. It would be a stretch - Sweet Spot wanted to arrive while there was still light so that she could hitch into Julian. Natalia also voiced her disdain for night hiking and arriving after dark. It would be dark by 8, only giving us a few hours to cover a lot of miles. No need to walk fast, which only served to injure Natalia's feet, but we certainly had to keep moving down the trail as much as possible.

We caught up with Mr. Cup, said hello and talked for a minute. I politely reminded everyone that we had to keep moving. As we left, Sweet Spot commented that she thought Mr. Cup was out of food. Since I had too much food, I quickly walked back and asked. "Poor planning, two days only water" was the shocking response. I told him that I had to much food and he had too little. I pulled out half a package of sesame sticks (sick of em), half a package of Sweet, Salty and Nutty Trail Mix (my favorite!) and a bag of plantain chips (meh) and dropped them on Mr. Cup's pad before he could refuse. I quickly packed up and we moved on, but as I left I noticed that Mr. Cup was already working on the trail mix.

My pack lightened by about a pound, we kept moving down the trail. Sweet Spot commented that I reminded her of one of the men that move cattle down the trail like the show "Rawhide." When I started us down the trail, she could practically hear me saying "Move 'em on out." Natalia agreed and they both suggested train names. Trail Boss seemed a bit pretentious to me and we were pretty sure that there was already a Scout. Driver seemed like a decent fit, so I mulled it over as we walked. It seemed pretty good to me, but it needed another day of thought.

We covered the last, flat section of trail in dim light and then the dark. Sweet Spot called ahead to Sage Girl and managed to secure a ride into Julian from a trail angel named Mike. I thought about it for a bit and wondered out loud if we should spend the night in Julian rather than under a bridge. It seemed like Natalia's favorite part of the trail were the towns so I figured why not. We all crammed into Mike's car and rode into town eager for one thing - dinner! Unfortunately it was late and Julian is a town that tends to close early. We weren't sure if anything would be open at 8:30. The restaurant that's open the latest - The Rongbranch Restaurant - showed a closed sign in the window although there were still a few diners. Natalia ran in to see if we could get some food to go. The waitress let us in and said the we could order anything from the deli or a potpie since they were already baked. Keeping things simple, I order us all potpies and salads with ranch since the girls were busy getting washed up. It wasn't the best pot pie of my life, but it was warm and we were happy to have some food in our stomachs. I left the waitress a rather large tip as thanks.

We walked over the few blocks to the Julian Lodge with a newfound appreciation for small towns. Natalia was discussing the dreams she had been having with white owls in them and how she felt that her recently passed grandfather was watching over her on the trail. As she was talking about it with Sweet Spot, we heard a screech and looked up to see a white owl flying above us in the moonlight. With that Natalia was reborn with her trail name - White Owl.

We ducked into the Julian Lodge and were both able to secure rooms. Natalia and I went to bed tired, but full and satisfied. Today had been our longest day yet, 21 miles.

Drag Me Into The Wild