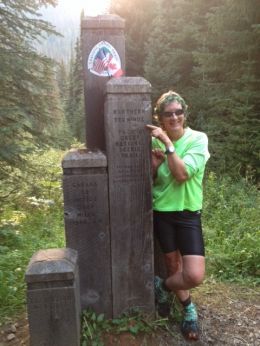 coyote at the northern terminus, finally!!!

Can't believe it's only 27 miles to Canada!!! got out at my regular time, but after climbing out of the bowl we camped in, I had to use the halfmile app to find the trail. I had headed too far west, but found it easily using the app..said my goodbye to Bump last night , since they would be stopping at goat lake and I wanted to press on..
the morning started in heavy fog but most of it burned off by noon..passed quatro via and one pint taking down their camp, they later passed me at a trail junction..I hoped to do 27 miles today to get me to Canada..we had the washouts to climb into and out of today, there was a trail crew working on the worst one, but they weren't as bad as I had imagined.
At the top of my last climb, a hiker recognized me from Grandview.. Mitch from the police dept in the town I work in.. he and a friend are out doing a 100 mile section, how cool!!! I visited with him while a thunder storm was brewing. it started pouring as I headed down the hill...zpacks poncho works great!!!
the last few miles took forever..but finally the monument came in site... I took a video and tears came to my eyes...it's been a long journey over the last seven years...but still hard to believe now it's over..
quatro via and one pint are camped here near me, just past the monument... one pint and I walked back to the border and she took the pics of me that I couldn't get by myself, thanks one pint!!! I didn't get gusto the troll pictures, so I'll go back again in the am...8 miles to manning tomorrow!!