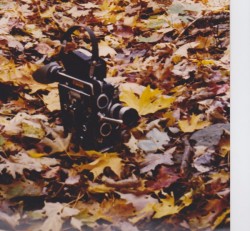 Do I really want to bring a camera this time?

I carried an absurdly heavy camera on the AT, a spring-wound 16 mm Bolex. That effort culminated in the award-winning film, North to Katahdin on the Appalachian Trail. An estimated 20 million people have seen at least part of this film.

On the Continental Divide Trail (CDT), I carried video cameras that kept getting smaller over the years as I section hiked from Canada down to New Mexico. So far only one DVD has resulted, Continental Divide Trail Diary: Montana/Idaho. Hardly anyone has seen it. Virtually no one has seen the footage I shot in Wyoming, Colorado, and New Mexico. Whether I ever get that footage edited into CDT Diary: WY/CO/NM is an open question.

If anyone asks me why I would want to hike the CDT, I'll respond: Because it's NOT there.

Fortunately, the Pacific Crest Trail (PCT) IS there. It'll be nice to have an established trail to follow for a change. I promised myself that I would NOT carry a camera on the PCT. That is a huge weight off my shoulders, both literally and figuratively.