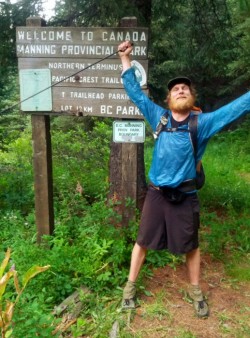 About a week ago, I drove 400 miles to tiny Mazama, Washington, then 13 miles up a sometimes frighteningly cliffy and rocky dirt road to the Harts Pass Campground, meet Zippy, be with him to the end and back, and then bring him back home as he transitioned back into "civilian" life. We hadn't talked in three days due to lack of cell phone reception, so it was just like the bad old days: show up and hope the other person does, too. Lucky us, we arrived within 40 minutes of one another - together again at last!

Being there when Zippy finished the PCT was something I had wanted to do ever since we discerned that Zippy wanted to hike the trail in 2014 but I wanted to be more physically grounded in Missoula that summer - therefore making myself willingly eligible to be his support person. Supporting a thru-hiker was an almost completely fun endeavor, and one I recommend highly, especially to other hikers. (The only time it stressed me out was when I was trying to assemble three mail drops in the midst of car tire shopping and several other boring, grown-up hassles.) Being support is excellent karma. Plus, if you're a hiker too, you have an insider's view of what your hiker will *really* want to eat and wear - and you know how good it feels to get just what you need.

Since I was heading to the trail with a car, I figured I would also indulge in another enjoyable support experience: trail magic. I had helped with this a little bit with Fresh Grounds on the AT, but this was my first time coordinating it. I borrowed a cooler and filled it with ice, Cokes, and orange sodas. I loaded the trunk with Twinkies, Oatmeal Creme Pies, chips, Oreos, and a Dixon Melon, which is the best goshdarn cantaloupe under the big sky, so aromatic and juicy you can sense it six feet away. (There's one on the kitchen table as I write this, and it's very distracting.) J. had also mentioned he'd like me to bring him something good for dinner. So into the car went one loaf of Le Petit Outre Rosemary Focaccia (to slice the thin way and use as two mammoth slices, natch), portions of Applegate Farms sliced roast turkey, gourmet salami, Muenster, green leaf lettuce leaves, a tomato, half a cuke, marinated artichoke hearts, banana peppers, red onion slices, a small jar of honey mustard vinaigrette, and a baggie of crushed red pepper flakes. I felt like I had the Hope Diamond of calories in that cooler.

The rendezvous at Harts Pass occurred during a beautiful sunny break in the clouds. When I pulled in after an hour of white-knuckling the low-riding Mazda up the rutty road, Zippy and five other hikers were sprawled on the campground caretaker's front yard, airing out their gear, which had gotten good and soaked over the past three days of rain - easily the wettest spell they'd had on the trip. (One of about ten rainy days total, Z says - a number so low it will blow any AT hiker's mind). The other guys had just eaten lunch, but were kinda hoping I'd show up with something more. It was supremely satisfying to pull out the feast and let them enjoy it. Trail magic is another experience I highly recommend. It is not noble like feeding homeless or involuntarily hungry people, but the camaraderie is wonderful, and folks sure are glad to see you coming.

The clouds blew back in again as we licked the last of the melon juice off our fingers. Drizzle descended and the other guys hiked on, after standing around and exchanging stoic, awkward man-goodbyes with Zippy. (No hugs.) Zippy and I had the luxury of a car, and time, so we shut ourselves in the back seat for a late lunch while the rain fell. (It took him an hour and a half, but Zippy ate that whole gigantic dagwood sandwich.) We chatted, chilled, I drew in my sketchbook and he snoozed until the mist lifted. That night, we slept in the campground amid suspiciously obese ground squirrels and brazen birds. The forecast was for clear skies the following days, so why rush?

The next morning was foggy but promising. I wasn't sure I'd be able to hike the last 30 miles with J., since I had tweaked my knee while tramping in Glacier Park the week before, but I woke at 5 am determined to try. Fortunately, we had beautiful weather and an easy hike: the last section had a net loss of 3000', over nicely maintained trail. The miles slipped away in the pleasant rhythm of walking, talking, and admiring the scenery. Around 4 pm we realized we had only eleven miles to go. If we hiked til dusk, we could camp at the border tonight! So we pushed it. As the sun slipped lower, the final miles of the Pacific Crest Trail wound down into an unimposing, brushy valley. A thin plume of smoke coiled from the lowest point - a campsite 0.2 miles past the border, we realized, where J.'s five friends were perhaps celebrating and cooking a late dinner. We hastened to the end, and there was the Northern Terminus: a cluster of drab wooden posts on end, plain to the eye, but a great psychological accomplishment to the hiker who had walked all the way from the drab wooden posts that marked the Mexican border. (Zippy tells more about what's at the US/Canada border in his next post.) We snapped photos, put our toes into Canada, and found a humble, soft, stealthy spot of almost-Canada in which to pitch our tent.

Hiking back took longer, partly because it was now uphill, partly because the relentless northbound drive of finishing had disappeared, and partly because we ran into so many exultant thru-hikers on the verge of completion. Some were singing, some were limping, all but one had a smile to share. One woman, Midnight Rider, was completing her second thru-ride on a horse! (The horse didn't seem exultant, exactly, but it was perfect for the job: small, lithe, calm, inky black.) J. had met many of the hikers earlier on the trail and enjoyed exchanging stories and well-wishes. When we got back to the car we met more amazing people, including a woman who is thru-hiking the PCT as an item on her bucket list, since she has been diagnosed with early-onset Alzheimer's. Her husband and daughter take turns walking with her and providing a support vehicle. It is a heartbreaking but beautiful act of love. (Check out their story at http://www.humanityhiker.com/.) We left them the rest of our trail magic sodas and snacks to enjoy and share. We were also able to help out a mother and son who had finished a section hike and needed shuttling back to their car. The mother lived nearby but hadn't heard of the PCT until her son, a young wheat farmer, decided to thru-hike it last year. Now she loves it too.

And, well, then we were done. Back at the car. Back to towns, and fresh apples, and delicious Mexican food and totally-worth-it $ 5 showers that included fluffy white towels and tea tree shampoo. Zippy no longer a thru-hiker, but a tourist at the Grand Coulee Dam, a hotel guest in Spokane, a nephew visiting his aunt and uncle, or a guy looking for an apartment in Missoula. Zippy has handled the transition very well so far. The funniest thing about it was his 180 degree shift from loving his badge of hikerness - his big beard and long, silky hair - to WANTING IT ALL OFF NOW. So I had one more act as thru-hiker support person: drastic barber.

Tonight, after a day of not unpleasant chores around town, we went on a little walk up Crazy Canyon as the sun set. Nothing long, nothing rigorous, but it felt grand to be outside in the woods with my love, moving through the strange and beautiful world, with no particular title or identity, just breathing and being. Cause isn't that what it's all about?