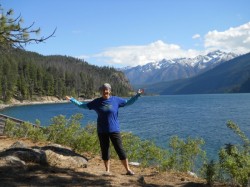 My sabbatical is official!

While I’ve been officially planning my NoBo hike of the PCT since March of 2013 it has been a dream of mine since I first heard of it in 1981. That was the year my then boyfriend( now ex- husband) and I bicycled across the USA on the Transamerica route. When we got to the East Coast we spent time crossing the Appalachian Trail which led to hearing about the PCT.

After being told I could no longer run after my hip replacement around Christmas of 2012 I struggled with finding another activity that I enjoyed as much. As luck would have it ,I had been dating a man who re- ignited my love for backpacking and the old dream of thru hiking the Pacific Crest Trail was reborn. At first I wasn’t sure about being able to accomplish this as a solo hiker, especially as a solo female hiker, but I gradually came to realize that it was indeed possible. I now absolutely love my solo trips and realize that I do have the physical and mental abilities required to accomplish my goal.

I am fortunate enough to work at Seattle Children’s Hospital where I’ve officially been granted a 6 month sabbatical for next year and will be departing some time around The second week of April to begin my adventure.

I traveled to the ADZPCTKO in San Diego last month and learned a lot from this year and previous years hikers. I was thrilled to actually stand at the Southern terminus in Campo where the hike officially begins( or ends, depending on which direction you go). I’m in the process of researching and purchasing the gear that I will be using, much of it ultralight, what a difference that makes! I’m not sure yet about blogging on the hike, I guess I’ll play it by ear and see how it goes. In the meantime I plan on blogging about my preparation for the hike which includes gear, training, food etc. feel free to offer words of support, wisdom, or advice.