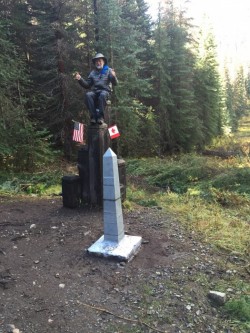 At the northern terminus of the PCT

It rained torrentially in spells till about 2 AM, with wind gusts up to 30 mph. Because my tarp site was chosen after it had rained hard for a few hours, it was easy to pick a site with no standing water or drainage problems. The wind direction was constantly changing, so wind-driven rain entering through either tarp opening was my largest concern. I had placed the taller opening near a tree base, which afforded some protection against spindrift, and I had also wedged my open umbrella in that space as a partial shield. In spite of my efforts, both ends of my quilt were getting wet as I stretched out to try to sleep, so the middle portion of my 8.5 foot long space was where I curled up in a somewhat damp quilt.

When the rain stopped the temperature dropped to near freezing, and I was cold. After I ate a Pro Bar I was generating sufficient body heat to dry the quilt enough to sleep soundly for three hours, and by 6 AM I was cozy and warm, just wanting to remain where I was. The farthest thing from my mind was to put on my four dry upper layers (wool T-shirt, thin windbreaker, puffy jacket and rain jacket) plus trousers, socks, and shoes (all wet) to go collect water for breakfast, but there was a break in the weather and it was time to get moving.

Sage and I were on the trail by 7:30 AM under a typical low cloud cover with the accompanying very fine mist. My feet were wet and cold as were my hands inside my wet synthetic gloves, so I pulled on my wind-proof over-mitts, which began the warming process. Much of the water from the soaked trail-side vegetation contributed to my discomfort by transferring to my already wet trousers as I brushed past. The first 4 miles of today's trail climbed gradually but steadily and that warmed me considerably.

As Sage and I walked and talked he remarked that, in terms of weather unfriendly to tarp camping, last night's was as bad as he had seen in all of his years of camping in the North Cascades. His comment made me feel great, because it meant that I had passed "tarp-camping 101". We speculated that last night would have been a great night to have a tent, but tent-campers we spoke with a bit later reported small rivers running through their tent floors or seams in single-walked tents leaking badly in the driven rain.

Sage and I got to the PCT Monument (mile 2650.1) at the US/Canada border at about 10:30 AM to find Shazam and Two Mile already there and signing the register. Willow and Scooby showed up a bit later as did three others. Pictures were taken, the register signed, and congratulations offered. Then it was time for the four of us to bid farewell and go our separate directions. Willow had not brought his passport for Canadian entry and was walking back 30 miles on the a PCT to the nearest road at Harts Pass. Scooby will camp just north of the border and finish at Manning Park tomorrow. Sage planned to stay near the border till his gear dried, then backtrack south about 3 miles, followed by walking an extra 120 miles east, mostly on trails less traveled than the PCT, to his home in northern Washington. When we parted, the border monument was still in shade, but the skies were rapidly clearing and the sun rising above the trees.

I had hiked only a quarter of a mile into Canada when I crossed a creek on a sturdy wooden bridge and found myself on a sandy bank in brilliant, warm, sunshine. I took off my pack, filtered some water, ate a bit of food, and luxuriated in the radiant warmth of full midday sun on this, the penultimate day of summer. Within half an hour my clothes were dry and my hands and feet warm. North of the border the trail stayed in the sun on a full southern exposure for those 4 miles of climbing. The clouds were now completely gone and I simply strolled, happy to be finishing on my own, with thoughts and emotions wandering all over the 172 days since I started this hike. One of the things I thought about, and it made me laugh out loud to do so, was that with a few more hours in this sunshine I could easily be ready to resupply and hike another section!

I was especially grateful that Sage and I got to hike the last 190 miles to the monument together. His aggregate knowledge of the peaks, passes, river drainages, lakes, campsites, and weather of the North Cascades is almost certainly unsurpassed in any of this year's group of thru-hikers. Talking about those and many other things made the miles go by more effortlessly. Together, we hiked fewer miles per day than I had been posting when on my own, but we camped earlier, had more campfires and reestablished -- at least in my mind -- what the hike should be about. I had pushed so very hard -- mostly solo -- for so long to finish; however, when finishing was assured it was very important and meaningful to me to slow things down and savor the final days.

A few minutes after 3 PM I came to Gibson Pass Road, walked another 0.7 miles to the lodge at Manning Provincial Park and was then finished with my thru-hike of the Pacific Crest Trail! My daily mileage, including 8.8 non-PCT miles, was 15.2.

I took a room at the lodge and started drying my gear for the trip home by bus, train and self-driven car. As much as I want to be home quickly, it also seems important, just now, to approach it in a way that allows plenty of time for thoughtful reflection.
Pensioner