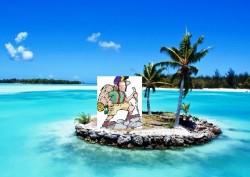 Bruce's input as to Tim's whereabouts are that after all that poison oak, he decided to hop a plane to Bora Bora to study Polynesian Tahitian Culture (PTC - GET IT???) rather than to continue on his hike and is now sipping a Mai-Tai and doctoring up his trail pictures as we speak. Carry on Tim, wherever you are...we won't tell...