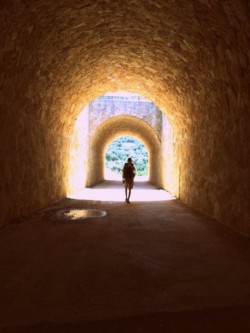 somewhere on the camino

No Pain, No Gain

The wonderful thing about hiking and the people who make up its community, is that no matter who you are, where you are from, or how much money you make, on the mountain everyone is an equal. There may be a difference in my physical abilities compared to the man next to me. But the 1000ft gain in elevation up an exposed ridge is the same 1000ft for everyone. The mountain does not care that you thru hiked the AT, or that you are an accomplished distance runner. It can happen to anyone.

The "it" I am referring to is injury. I know, I know. It is the dirty word that everyone avoids talking about but silently owns a space in the back of your head. Even when I feel I am at my fittest and my body most prepared to tackle the stress of a long walk, it is my greatest fear. When interested people ask "are you going to be scared?", the most common things they refer to are bears and strangers up to no good. I always answer with a giggle because while a bear is for sure dangerous, an encounter is a reward. A memory that I will keep with me as a picture for a long time. And frequently the people that would draw your attention for looking odd or threatening in the real world, turn out to be the most interesting people you will meet in the wild.

Injury is the metaphorical bear lurking in the brush outside your tent at night. Always watching and ready to strike. It can happen at any moment. And when it does, you know the miles ahead are going to hurt! Last summer in Scotland, I felt strong. I felt that I had my hiking legs solidly under me. The miles in the early part of the Scottish National Trail are relatively flat and easy . A combination of rolling hills and leisurely paths along rivers full of migrating birds and other animals. I was pounding out 15-20 mile days with ease and finding plenty of tasty food. Walking down a flight of man made stairs I felt a slight twinge on the side of my knee. Initially I wrote it off as just putting my foot down awkwardly. Over the next fifty miles the tweak transformed from just another pain to dominating every single step and thought. Limping into Edinburgh I could barely walk. My IT band had failed me. The entire future of my trip was now in jeopardy.

One of the consequences of quitting your job as an American is losing your health insurance. No matter how confident you are in yourself, injury is sometimes completely out of your control. Facing a hospital bill totaling thousands of dollars because you broke your foot or drank questionable water is something that weighs on you. Its been weighing on me because in two weeks ill have no coverage until I get final approval to buy insurance from the open marketplace run by the government. All the hard work and sacrifice to save up money to make my trip happen could be gone with every step.

I never like to talk politics in public forums. Whatever you believe is none of my business. My vote is equal to yours and vice versa. But it pains me that our neighbors in Canada can take life risks and know that they will be covered in an emergency. As well my sister, who moved to the UK to start a life with her husband. Shortly after she received that commitment from her new country in the form of free care.

Now when people ask me what scares me in the middle of the night. I always answer "privatized health care".