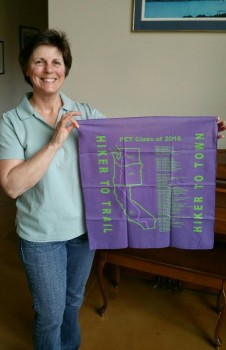 A musician friend of mine overheard me talking last year about my section hiking preparations from Stevens Pass to the Canadian border in July/August 2015 (yay, completed!), and she wanted to know if I would be interested in hiking the WHOLE SHEBANG in 2016. My interest was immediately piqued as I have always wanted to hike the whole thing, and my current section hiking buddy Jingle Bell decided to hang up her long distance boots and I was going to be partner-less for the final big push of getting the trail done. Last September Linda (no trail name yet) and I started the planning process. I was initially going to hike the parts that I hadn't completed yet, but the more I thought about it, the more logistically difficult it was going to be if I tried to skip the sections I had already done and then tried to meet up with Linda. Included in this decision was my husbands offer to be a personal trail angel and follow us along in our motorhome up to Kennedy Meadows. (He is now going to support us through South Lake Tahoe, in case we get to KM and decide to skip the Sierra until a later date.) So now, what the heck, lets hike the whole thing!
October through December was filled with analyzing existing gear and replacing some of it with lighter gear. Being Gadget Girl, this was my FAVORITE part so far! Oh, the goodies to buy and test, what fun...
Another item was to start cooking and dehydrating dinners for the trail. That has been an ongoing adventure which has now been wrapped up. Boxes are now filled and ready to be mailed at their designated time. The toughest meals to figure out were lunches. I chose the usual tuna packets and tortillas (to be filled in just before mailings), peanut butter and jam (picking up bagels in trail towns), and energy bars and almond butter galore.
Now that the food boxes are done and gear figured out, I have been trying to get some training hikes in here and there in our local area. We are very fortunate to live between two volcanic mountains, Mt Hood to the south and Mt Adams to the north, with abundant hiking and biking trails everywhere. I get out when I can but its looking like I will be starting the trail and hiking myself into shape. Based on past experience it will take about three weeks of hiking before I feel in good hiking shape. Our plan is to start easy and slowly increase our mileage to help reduce any potential injuries.
We are starting earlier than the main PCT pack so we can mosey along and not overheat for the first 700 miles. We know the possibility of dealing with snow in the mountainous terrain in the usual spots at such an early start Fuller Ridge, Baden-Powell, etc, but will just deal with each issue as it pops up. We've been watching the weather and forecasts whew, the Sierra is getting hammered this month, isn't it?
Thats it for now Out for a training hike!
Gadget Girl