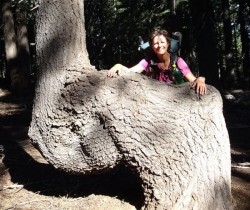 October 3, 2016: NOTE: I apologize for delaying writing up the final three days of my PCT adventure. I've had a few people contact me asking if I had fallen off the edge of the earth, and having experienced the same thing with other hiker's journals over the past few years, I owe it to you all just to "get 'yer done".

We started at 6am hoping to beat some of the heat. We actually had mosquitoes to deal with this morning. Once we climbed over the hump, the north facing slope was quite cool and a huge break from being in the sun. We found the spring (easy) and filled the water bottles. Met He-Man and his brother as they were finishing up at the spring. We also met a German gal who was having a difficult time getting motivated due to lack of sleep at night. She had started at Truckee and was hoping to finish out at Cascade Locks. We stopped at Kosk Spring to wait out the afternoon heat and then started back up at 4:15pm to hike another 7 miles to Moosehead Spring. I made one of my few freeze-dried dinners, lasagna, and it was terrible. I was really bummed as each meal is precious out here and one can't simply go to the refrigerator and heat up something else.

Hiking each day for miles gives one time to do a lot of thinking. This is bad if thoughts include leaving the trail. Audio books tremendously help with diverting our attention away from these negative thoughts, but I had lost my bluetooth earbuds which sent me into a very bummed attitude. It was like the last straw that broke the camel's back. Checking the weather on my Explorer showed continued heat wave, the corns on my toes were irritating, traumatic events were happening at home, and I became terribly homesick the last time I talked to my hubby and son. I tried to rein in my thoughts and redirect them but it seemed to make it worse. This whole thought process actually started spiraling before Chester when I found out that my dog had Guardia and colitis and was really sick. Getting to Castella started to become the focus of leaving the trail. I started discussing this option with Seasoned Strider who of course preferred I stick it out. We discussed several options that could entice me to stay on the trail but she really wanted to finish out California as we were in the best shape we had ever been in. I simply couldn't face that many more hot days, but would I regret it in the future? I was open to jumping to Ashland but it was hot there too. We decided to sleep on it and see how things looked in the morning.