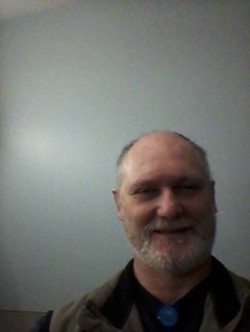 I wanted to hike a Pacific crest trail ( pct) section from Chinook pass to Stampede pass approximately 50 miles. My wife Linda dropped me off at the pct trailhead near Mt Rainier off hwy 12 and with a quick goodbye I was soon heading up the trail. As I started hiking up I looked back to see my wife pulling slowly out of the parking lot to head to her own outing with the church on the other side of Mt. Rainier. A few miles up the trail I met 2 sets of hikers as they passed me coming down, we said our hellos and continued on our respective ways. The trail was rocky, rooted and heavily traveled , I was leaving the openness of Chinook pass and entering the heavily treed forest to the north. After an hour I soon walked into a beautiful small lake basin and sat down on the dry grass for my first break. Here I ate my most heaviest piece of food, an orange. There was a person on the near shore quietly taking pictures of the tiny lake and I let him be, while I rested near by. It was now 3 pm, and I needed to get about 7 more miles in before dark, so off I went. It was more thick forest as I climbed to 5000 feet, then at 6000 ft I broke out into the wide open space on a bare windy ridge. The view of the valley was grand and it reached for miles. I followed this ridge around and was whipped by the cold fierce wind. At 6 pm I found a clearing on the top of a pass that seemed at the time to be the best place to camp for the night. Big mistake, as it turned out to be too windy and by morning I was without a standing tarp, cowboy camping, luckily it did not rain.

I awoke cold and annoyed with my poor choice of camp spots. A windy mountain pass is a poor place to try to sleep. I took down my tarp which was already blown down and I packed everything up. Throwing some trail mix into my mouth I hobbled off slowly down the trail. In 2 long hours I stopped and rested and looked over my maps, mostly to see how far the cabin was away and what the terrain was to be like. 15 miles was to be my day length and for the first time out hiking I was to sleep in a back country cabin. The Mike Urich cabin is open to anyone hiking the pct and is managed as a snowmobile clubs hangout in the winter months. I was going to stay here in September and did not expect company. The day wore on, and I passed a few spur trails but no creeks or lakes. This troubled me because I needed water. I began to ration the little water I had and began to worry. What would I do without water? Here is when I realized my lite-weight plan of using one water bottle was not so smart. Marching along I tried to not think about it, but It caused me to eat less for fear of drying my mouth. The view from the trail was a mix of rugged Mt peaks and green valley forests and were always enjoyed by a rest stop on the large logs and rocks that became my resting place for the short while. I wanted to drink but could only sip on the little water I had. Then finally five miles separated me from the cabin. I passed no creeks or lakes but decided to drink the last of the water and hoped that the cabin had water near by. Then along comes a hiker the opposite way and guess what we talk about ? water, score. There's water at the cabin. I lucked out. The cabin was situated at the edge of a large open grassy meadow, there was a large communal fire pit out front and a double outhouse out back. Inside was a wood stove and benches, a upper sleeping loft and a register book for pct hikers to sign in , in it must have been 200 entries for this past season. I did not write in it. I gathered up some water from the only creek for miles and on the metal surface of the woodstove I set up and cooked my dinner of thick bean soup using my tiny 2 bit espit wing stove... then after having boiled for 5 minutes and cooled for 5 minutes I enjoyed the nights meal. Tonight will be a warm night I thought, and I set up my bag in the corner, placing my headlight nearby, then using my shoes and extra clothes as a pillow I got in and went to sleep. During the night I was visited by a friendly mouse who ran over my face but fortunately left my food alone.

I slept warm and awoke to darkness at 4 am, staying in bed I hoped to fall back asleep, but could not. I was to use to waking up early for work at 2 am, so I just laid there till 6, and then got up to cook oatmeal and coffee for breakfast and await the day to begin at about 7. Using my head lamp I fumbled thru my food bag and started up the stove using the water I had collected from the creek the night before. Again 5 min to boil and 5 minutes to cool the cup back to a lip-touchable temperature. I did this twice for both the coffee, and then the oatmeal. After my meal I packed up and tidied up the cabin to leave and then sat on the bench to read more of the register with my headlamp on . Most entries where short and comical and some hard to read due to sloppy hand writing. Once day light perked up, I headed out the door. I went back to the creek to tank up and fill my water bottle for the next leg. I must have drank a whole quart at that one sitting as I remembered how dry the trail was the day before. Walking out of the meadow I noticed a good sized horse coral that looked well maintained. I noticed there was also a slew of wide trails most likely used by the snowmobilers as I continued my walk up the pct. Up, up, and up I went, the trail was climbing steadily but it was a good soft tread most likely used by the horse riders. The forest was getting thick again and it was still mostly dawn out . I had another 15 mile day today and was moving quite slow. As I hiked along I liked to watch for large animals but small ones are nice to see too, I did not see any and wondered what kind of wilderness I was in. Breakfast never seems to be enough and I soon got into my lunch snacks, so I strapped my trekking poles on my backpack to free my hands to munch, and Munch I did. The trail topped out on a ridge overlooking a wide expanse of forest, the wind picked up and I layered up with my wind breaker. Here the trail circled a bowl and then rounded some rock slides and became thinner. I wanted to stop but was too cold then later wised up and put on another jacket and switched out my hat to a fleece ski hat and put on my gloves. Turning down hill I picked up my pace and warmed up , I was on the move. Off came the hat and gloves and in went more food. Switchbacks, I love and hate switchbacks they make the trail more level, yes, but when going down I know I will be having to gain back that what I loose. And switchbacks were the main stay for awhile as the hours played on. Straightening out, the trail tread was nice and soft once again, And I started to see mileage markers and knew I was coming close to a road as the trail also got wider. Then bam, a quick camp site then two and then the road. This access road was Tacoma pass , it being close to but not quite my exit. Here I find parked is a motorhome with the occupants being the parents of a thruhiker coming in later in the day. I being late and exhusted and ready to call it quits for the day, and seeing that I needed to get up early at 2 the next day for work, ask for and receved a ride 8 miles up to my waiting car at Stampede pass. Thanking these trail angels for the lift I loaded up my truck and sped off to the cafe at Snoqualmie pass and ate a fine dinner.