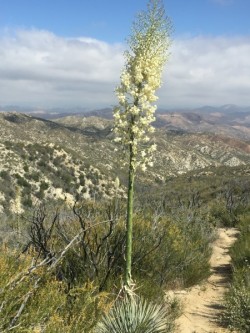 Well, I knew today was going to be extra good. There was a table with a water cooler on it. Sparkletts water= 1st class drinking today :)
My head was full of mixed emotions today because I knew I was only going to be on the trail for 2 more days. I just couldn't get enough miles in each day to make it to Kennedy Meadows without destroying my body. So, I will end early- 248 miles short of my goal. It's disappointing, but there is so much to be grateful for, as well. Also, I can still day hike and slack pack for the rest of the year and put a dent into what I missed.
On parts of the trail, I was extremely slow and frequently stopped to just glance at my surroundings and reflect on the past month. It was like a lifetime of hiking. I took many pictures of my surroundings and recognized an upcoming area. I could see Acton and the KOA Campground nearby. Walking as slow as I had since April 17th, I just monied along with a bittersweet taste. I was close to home- which I couldn't wait for. But, soon I'd be leaving the Pacific Crest Trail and so much camaraderie with my hiking family.
A couple of miles down the road, a day hiker named Ken/"Old Weeb" stopped to talk to me. He was another "trail angel" who handed me a bag full of coffee, hot chocolate, and seasonings to add some flavor to my trail cuisine. Little things and simple pleasures mean so much out on the trail. I could feel his passion for the PCT and how bad he wanted to be part of it. Hike it. He filled the void or "got his fix" by being kind to hikers. He also mentioned that he would love to hike the Pacific Crest Trail but didn't think time was on his side. So, I told him I was 60 and just walked 442 miles. Essentially, I told him that it's never too late. He responded, and I thought that maybe that inspired him. Then, I thanked him and moved on down the trail.
Later that day, "Legend" passed me, and "Blur" hiked with me into the Acton KOA Campground. I beeline to the store and bought some Gatorade, Reeses, Drumstick ice cream, and Chex Mix. I went all out- instant junk food gratification. There were nice tables outside the store/office. I sat with Jack (from France), "Scruffy", and "Mountain Dew" 9from Texas), "Blue Moon", "Sedapchuck" (spelling?), and "snuggles". "Blue Moon" showed us a card trick. And then "Sedapchuck" watched closely and almost duplicated it! He must be some kind of math wizard. My mind is better at playing "Go Fish", lol. A few minutes later, these "trail angels" from Agua Dulce came up and handed me a box. Inside was another jackpot! A box of sandwiches (PB&Js, tuna, egg salad, and chicken salad on Hawaiian rolls). It also included Red Vines, Twix, Milk Ways, Dill pickles, and a bag of Fritos. You just can't imagine how fantastic everything tasted. My spirits were lifted again as I dined like a king. I went in the store and got the "trail angels" some ice cream and gave them my Reeses as a small token of my appreciation.
There was happiness all around the tables, and it was a good time to be at the KOA. I bid farewell to the group and went to take a shower before getting back on the trail. With a full stomach and a shower, life was great. Around 4 PM, I followed "Blue Moon" and Jeanie out to the trail. I saw lizards, birds, squirrels, and a snake today. Again, I slowly walked along, wanting to savor everything that I had shared on the trail- all of the graces that Mother Earth has to offer.
At mile 447, I stopped and set up my camp for the last time on this part of my PCT quest. I could hear the traffic heading north and south on the 14 Freeway. Yes; I was close to home.
"Life is good."

Of All The Paths You Take In Life, Make Sure A Few Of Them Are Dirt