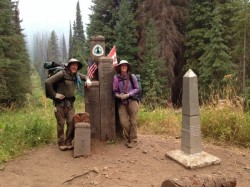 With only about 3.5 downhill miles to the border monument, we arrived quickly but had to wait for other hikers to finish their photos and sign the register before we got a quick photo. It was a little strange because we still had about 9 miles to hike into Manning Park, Canada before we were really done.
The section of trail between the border monument and the PCT Camp in Canada was overgrown and washed out in places but the rest of the trail in to Canada was in great shape. We found there was a kilometer road walk to the lodge from the trailhead just when we thought we were there.
We didn't waste any time today because we were almost out of food. Our last night's dinner got knocked off the stove and so we had to eat half of today's lunch instead. By the time we arrived, I was running low on energy but nothing a bag of chips and a Coke couldn't fix.
Manning Park treats hikers really well. They let us use the pool shower, laundromat and hang out until the 2am Greyhound bus. Turned out to be at least 12 hikers that night and a few we knew from the trail who could not get on the previous bus. We also ate dinner at the restaurant with a new trail friend and bought snacks at the country store. Future hikers be warned: there aren't many snacks to choose from. We had hoped to buy quite a bit of food to eat during the Amtrak back to Portland because we only had 50 minutes between the bus and train and we had to get through customs too.
To my utter amazement, the Greyhound bus was on time to Vancouver even though it picked us up a little late. The Amtrak left late because of US Customs delays. It was a relief to be on the train because my phone didn't work in Canada even though it was supposed to and we would have had to change our tickets before the train departed or lose the money.
Once in Portland, we took the light rail and a city bus and then walked a half mile to get the car. The car storage company had to lock my car outside their gate because they closed at 5pm. It was a seedy neighborhood and we rushed to arrive about 5:15pm. We had no hotel booked because the smoke was bad the entire trip from Canada back to Portland, Oregon and we were unsure about going back up to Olympic NP as originally planned. The evening traffic in Portland was horrid and we had to find a car wash too. My car was covered in tree debris, ash and bird droppings from the storage lot. By the time we got dinner at 8pm, we felt like zombies from traveling all night and day and we were really looking forward to sleeping in a bed.
Phew. We'll post some follow up info once we're back home.