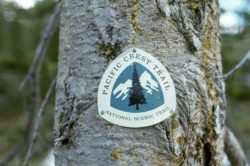 Well, the day is getting closer. I am retiring after 40 years of work and will be hiking the Pacific Crest Trail. When I graduated college back in 1976, I had the opportunity to join some friends hiking the northern sections of the PCT. I had only planned to stay a few weeks, then return to Wisconsin and start looking for that 'real job'. So off I went, hitchhiking from WI to OR. I met up with the group at the KOA just outside Ashland OR. Little did I know what lay ahead.

I had experience camping, but was rather ill-equipped for this adventure. My friends were truly experienced, hiking the southern half of the PCT the year earlier. They provided a list of basic gear that I would need. The hiking was fun, the scenery was awesome and the friendship was great. So much that I was able to scrounge up some dollars for food to continue with the group beyond the few weeks. Some of the experienced members in the group had to leave the trail for other commitments, so they swapped their better gear for my inadequate stuff, allowing me to continue. This lasted for nearly 2-1/2 months before my funds eventually ran out, then hitchhiking back to WI.

Fast forward 40 years, the opportunity came around again. A few years ago, my daughters convinced me to try hiking in Colorado. I was skeptical, thinking sleeping on the ground would prove too much. To my surprise, I was actually able to get out of the tent the next morning. I think that is when the gears started turning, of returning to the PCT and experiencing more of the beauty discovered in 1976.