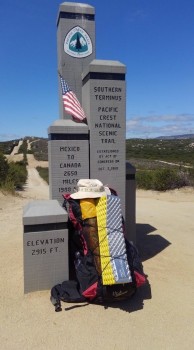 Day 1, April 13, 2017: After a brief, but beautiful reunion with my wonderful wife I boarded a plane to San Diego arriving safely with my pack. No troubles with TSA. Paul Riezer picked me up at the airport and drove me to the Southern Terminus of the PCT. I was pretty excited to get on the trail, so after a few selfies I started walking north. After a mile I felt that something was wrong, so I checked. I forgot to sign the log book, so I went back and signed. Met some folks and got some water at the lumber yard. Walked past Campo, past the abandoned farm where the wind constantly blows the steel roofing, clanging and slapping! I met this guy, Shawn, and his dog, Breezy, a Great Dane, with all of his shit scattered down the trail. Dazed and confused, the other hikers still talk about him. Camped for the night on a plateau near mile 9. In the morning a guy called Bill Miller approached me to use my cell phone. Claimed to be a lawyer, also dazed and confused. I helped him but Sidon;t trust that he is not really a conman.

Day 2, the 14th: I walked into the resort of Lake Morena, the hike was uneventful, water found at Houser C reek. Lots of hikers pooled up n the camp, we made some new friends. Tim, just out of the Air Force, great guy. I hope he continues to walk. Ben from Israel, Emily form UK, Lisa from Bergen, Keith and Steph from Florida and so on. I had a nice margarita and chicken sandwich. We were all treated with our first trail magic, as Cris, owner of Zero Day Supply, Tripple Crown guy fed us hod dogs and beer. I tent camped, a very cold night with ice on all our tents in the morning. Noses in camp as it was a start of the Easter weekend. Walked on in the morning.

Day 3, the 15th: Interesting day with lots of day hikers on the trail to Kitchen Creek Falls, seems a popular.ar spot. Across front he parking lot there is a rock with Native American grinding holes (Morterios). I took some pictures, pretty cool! Just walked the day, filtered water when I could find some. Tent camped when I got tired somewhere on a ridge. I walked into Mt. Laguna on Easter Sunday.

Day 4, the 16th, Easter Sunday: A man in the camp said I looked hungry and gave me a chicken drumstick. Turns out, I was hungry, very nice! I got a little resupply in Mt. Laguna, met Skipper, who helped me with some trail tips, and walked on. Cowboy camped on a ridge, near mile 50 somewhere. Rocky Spot! Great night with a gusty wind. I loved it!

Day 5, the 17th: A very good day walking. Started out slow as the toe and foot blisters made me swagger a little. Put in a good hike finding water at Rodriguez Canyon, and finding no water at the Fire Tank. Cowboy camped in this massive boulder mountain with just a little flat spot. Rained a little, I just pulled the ground sheet over me. Awesome! Near mile 70.

Day 6, the 118th: Awoke refreshed, felt great, but needed resupply and recharged for the next leg into Warner Springs. Hitched into Julian from Scissors Crossing, a nice young lady (Andra in a black honda) landed in a hiker heaven! Carmans! The sign said closed but Skipper was at the door and said come on in. Carman gave me a big hug, handed me a Mamosa and made me a massive breakfast burrito! I washed the few clothes that I could and got a room next door, Bed and Breakfast, a good move as of now well fed, new friends, feet are healing and as I write it is pouring rain outside! One way and Pockets here, also Keith and Steph.

Day 7, the 19th: So I caught a ride out of Jillian with a Thru-Hiker (Brewhiker) who was driving folks to Scissors Crossing, mm 77. Walked all day and got my first 20! Met some cool folks on the trail, including Patricia 3who was an aging desert rat. She gave me some lessons on plants and cactus, Thank You! Met Skipper again and spent a pleasant night on a sand bar (small one). Got up early and had a great hike!

Day 9, the 21st: So I got my Mal packege this morning. Sorted and disguaarded what I needed or not! Left Warner Springs near 1200 so felt like a short day. Also there was an edible that took most of my ambition away. I spent the night on a sandy creek bed. Nice night and morning. Saw a group of hikers playing cards under a big tree, as I rested.

Day 10, the 22nd: Woke refreshed but low on water. So hiked on into Mike's place, a trail angel's summer house. Filled up on water there. On the way I was walking with the card players, Boo Boo, Flapjack, Michigan, Steph, T-Funk. I was playing with a rock, trail named "Kolohe", I accepted. 90 degrees and no wind. Difficult day. Spent the night just past Mike's a few miles. Took a picture of camp, just a flat spot.

Day 11, the 23rd: Walked early with high clouds, nice morning, but 90 degrees with a wind later in the day. Trying to make it to the Panidice Cae before 7:00 pm. Rumored to be the best burger on the trail...made it and so far, very true! Got a ride from "Mark" tho with bad knees so he was helping with rides. Met the card players at the cafe and camped together at Idyllwild.

Day 12, the 24th: Zero day, laundry, re-supply, and wi-fi. I will walk again tomorrow. Today was a zero day with Flapjack, T-Funk, Boo Boo, and I splitting the rent on a cabi . Idyllwild Inn had some reasonable rates and hiker friendly attitude. Shopping and gear resupply close by. We rested and I cooked a casserole, then breakfast. The "Boys" had a pub crawl, so a sleepy morning. Today was a very valuable day as a shower, clean clothes (see laundry pictures) and rest for the blistered feet was sorely needed.

Day 13, the 25th: Started to hike about noon as my microspikes did not arrive until 9:30. Clean up at thee cabin and check-out took a little while. Flapjack and I hiked together up the Devils Slide Trail to the saddle, took a ring turn and had to hike back to the trail and start again. Met some friends at the intersection of Deer Springs Trail. Close to Fuller Ridge. We camped there. Very pleasant night and beautiful sunrise!

Day 14, the 26th: Fuller Ridge, snow, but not bad. Maybe a mile al together, mostly on the north aspect. The ridge itself was clear. I started to feel bad about bringing microspikes at all. Though I used them to keep from falling. Later that day or the next I heard that a hiker behind me fell, broke hi ankle bad enough for a helicopter ride out from the saddle. Beautiful area. I loved to be back in the trees! Mile 198.5. Spent the night on a ridge, stealth camped with aa blasting wind. I thought it would tear the tent apart. Did do some damage, but easy fix. Some other hikers were not so fortunate as all of us faced the same wind and some tents failed. I woke early and managed to pack up without losing anything to the wind. Hiked down and the wind continued. I guess that is why there are so many windmills in this valley! Down the mountain, across the desert floor past the little town of Cabazon where the boys and Steph hitched into the casino for all-you-can-eat. They will lose money on Boo Boo! I walked on. Finished the day at the Whitewater Reserve, off trail .5, but very nice place to stay. Wind again, but not all night with a very pleasant morning at mile 218. So almost a 20 day!

Day 15, the 27th: So with an average of 15 miles a day I should be in Big Bear in three days. Time will tell. So walked up Mission Creek most of the day. This was an awesome choice for PCT route through the mountains! Beautiful, and water close all day. Uphill all day as well, but a gentle climb. Spent the night cowboy camped on a bench near water.

Day 16, the 28th: Walked on up Mission Creek and over the hill into the next drainage. Amazing how quickly the terrain changes! I pushed a little on this day to get close to Big Bear. My feet paid the price. I soaked them in cold water when I could. Spent the night just past the Lions and Tigers and Bears. At mm 251. Cowboy camped under a big tree. Very pleasant night as the leaf litter helps to keep you warm.

Day 17, the 29th: On the trail early, met the South African couple again (Dr. McDirty and Cougar) and later a big ol' dude named Tom. No trail name. I just called him Big Tom. We have a lot in common. Both retired from a fire background, we talked a lot as we walked. He went on and I stopped in Big Bear. ASs I walked to the parking lot at the highway I saw Andrew, who introduced me to a young couple, Jeremiah and his lovely wife. These two wonderful folks gave me a ride almost to the Hostel in Big Bear Lake. Sarge had a room for me there. And there was my ol' friend T-Funk!! Recovering from leg injury! Awesome, will zero here.

Stride along with me my young friends; let's see what is over the next hill!