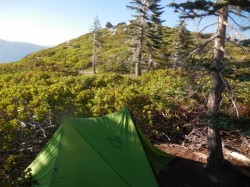 So, after 1000+ miles, it is time to close the books on PCT 2018. I'm tired, and thoroughly burned out on the PCT for the moment. The plan, when I set foot on the trail just south of I-80 on Saturday 11 August, was to go all the way to Dunsmuir/Castle Crags, where I started the long NorCal/Oregon stretch (almost 655 miles) in June. That would have been a distance of about 353 miles and would have put me just short of 1300 miles for the summer. Sorry for all the math, but the point of that last stretch was to bring me to approximately 1300 miles, roughly half of the PCT. But something sort of unfortunate, and another thing sort of fortuitous, happened yesterday (18 August) when I got to Belden Town (135 miles from Truckee).

But first a bit of background about this latest section of trail. It was hot and dusty, and for all intents it is seemingly uphill the whole way. And from my experience with roughly 40 percent of the PCT (again, sorry for the math...), this particular section is the least spectacular that I've seen so far. That's OK though; I didn't ever expect the PCT to be a walk in the park from end to end. Nonetheless, it was at times completely miserable trekking, and for much of the time, my sole motivation in getting to Belden was to get a nice hot shower, wash my extremely dirty clothes, and get a couple of cafe meals - in essence, to have a nice zero day before continuing on the next 135 miles to Burney Falls. I actually mapped out my daily mileages such that I would get into Belden fairly early on Saturday morning, and make all those happy things happen over the course of a day before heading north on Sunday (today!). I pushed a little harder on Friday to leave myself less than six miles into Belden (see the attached photo of my last campsite - a cool location). I went to sleep almost elated that a day of rest awaited me. But the following morning, around 6:30 as I began to descend into the Feather River Valley, I heard unmistakable, and loud, rock music emanating from the far below me. Now I love rock music almost as much as anyone, but that sound meant two things to me: first was that some sort of music festival was going on in Belden Town; second, there would be no day of rest. As I got closer to town, the sea of tents - and port-a-potties - was a testament to the size of the festival. Turns out some 1800 fans - followers ala "Deadheads" of old - of a high-tech instrumental group called Sound Tribe Sector Nine (or STS9) had descended upon the small resort town of seven full-time residents, and the scene was surrealistically reminiscent of Woodstock some 50 years ago. The music, which I was informed had been going on all night, stopped around 7:30 and was to begin again around 10:30. During that lull, I made my way to the cafe and ordered some breakfast, where I was told by a delightful yet frazzled waitress the wait for the food would be about an hour. Understanding that my shower and laundry would not happen, I took the positive step of getting to know some of the festival goers who were also waiting for food, to learn a bit about STS9 and the backup bands, and to collect my resupply package from the significantly less-than-enthused store manager.

Then the fortuitous thing happened. My hiking buddy Phil, who had dropped off the trail a few days earlier (that's another story), came walking through the back door of the cafe leading to the porch where I had my resupply gear spread out. That was all but a sign from God that my hike was done. Phil had come to check on me, and although neither of us knew it at the moment, to be my liberation from the STS9 music festival and my ride back to Sacramento, where I planned to catch an Amtrak train back to Martinez, a short distance from my home. As we drove back down Highway 70 through the Feather River Valley in Phil's sleek Beamer, he suggested that dropping me off at the train station would be unacceptable and that he would not do anything other than drive me all the way back to Walnut Creek. It is truly one of the kindest and most generous things anyone has ever done for me. I owe him, big-time.

So, as noted above, I am done for the year. I am eager to spend the fall and winter with my family and friends, taking care of stuff that needs my attention, and planning for PCT 2019. Stay tuned for the next installment of this blog, as plans come together and the adventure begins again. Thanks for your continued interest and, most importantly, your spoken and implied support during my thousand-mile journey. What an adventure it has been!