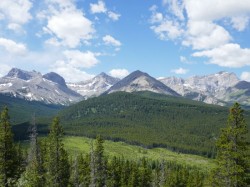 The view from one of our local hills

We hiked the whole PCT northbound back in 2003. We started on April 11th and got to Manning Park on September 30th. We went through the Sierras early, leaving Kennedy Meadows on May 29th, getting to Tuolomne Meadows on June 19th and finally leaving most of the snow after Dick's Pass on July 1st. We did not mind the nice firm Sierra snow in the mornings but we did not care for the deep mush in the afternoons. Gail was not well for much of the time between Kennedy Meadows and South Lake Tahoe. We decided back then that we would someday hike this High Sierras section when there was no snow. Now is the time.

For this trip we have chosen to go southbound for a change of view, and start on August 20th so that we we will get to the popular John Muir Trail section after Labour Day when the crowds will have diminished. Yes, heading into the high country in September we may get some new snow but hopefully not much and only for a short while. Being 16 years older now we do not expect to do this hike faster than we did in 2003. We are estimating to hike the 590 miles from Donner Pass to Highway 58 between Tehachapi and Mohave in 46 days. In 2003 we did this section in 44 days and were slow at times due to the snow and Gail's sickness.

We applied and got our permit from the PCTA back in February. More recently preparations have included some backpacking in The Bob and the Olympics as well as local day hikes. Yesterday I printed the Halfmile maps for our section and they are certainly better than the ones in the 3 volumes of guidebooks we used in 2003. Gail is getting a new sleeping bag and we will be using solar panels to charge electronics on this trip. In 2003 I used slide film in a camera that did not need batteries and we did not have a phone or tablet or Inreach device like we do now! For the snow in 2003 we used (and needed) hiking boots with fairly rigid soles but for this trip we will have lighter footwear. We are making piles of gear to take in our equipment room and checking out places in the Reno area where we can store our van for the duration of our hike. In 2003 we travelled to San Diego and returned home from Manning Park by Greyhound bus. That is not an option now as we have no Greyhound bus service now in Western Canada.