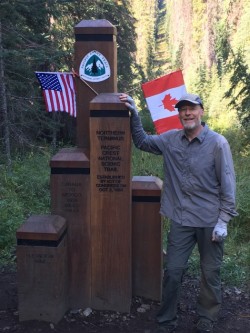 Barb dropped me off at Rainy Pass after a very nice zero in Winthrop. Man, I love those hiker towns! We met Dan and Sandee at 9 AM at the pass as planned. It was a beautiful day when we left Winthrop but as we approached the pass...rain. After deciding to put on full rain gear we headed up the trail. It was only 30 minutes or so before we climbed out of the rain and began enjoying the scenery. The plan was to hike about 18 miles each day and reach the border on Wed. The first night we camped at Brush Creek where we met Lash (long-ass section hiker). The next morning we had a significant climb up to Grasshopper Pass. The weather was really nice and the views were excellent. We had lunch at Hart’s Pass and then camped just beyond Windy Pass. One thing that has become apparent is how crowded the Guthook designated camping spots have become. We discussed whether or not it would be a good idea to create more tent spots in these designated areas rather than have people carve out their own. The destination for our last night was Hopkins Lake. After a week and a half of hiking at the faster pace and more miles than I typically hike I was tired! Hopkins was a really pretty lake surrounded by a scree slope like the stage of an auditorium. The high point was watching a bear traverse the slope in the morning. The miles to the border went by quickly and we took the usual pics at the monument. We climbed about a 1000 feet in the next four miles and then coasted downhill the next 4 miles to Manning Park Lodge where we enjoyed the usual food, beer, showers and soft beds! The next morning Dan and Sandee’s daughter Danielle picked us up and drove us back to Washington where they dropped me at the Amtrak station. I want to say thanks again to Dan and Sandee. What great people and excellent hiking companions! If it hadn’t worked out for me to hike with them I don’t believe I would have continued to the border. So, now, what’s next? I have 100 miles of Washington that I haven’t hiked and about 1000 in Cal! Yikes! One thing I know for certain. I’m done for this season!