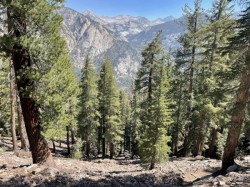 I had a much more pleasant day today- I took it much easier. I did a fair amount of climbing and descending, as I did two climbs: Bear Ridge and Silver Pass.

I slept in, and just got up when I felt I could sleep no more. I was really trying to maximize my rest. Regardless, I was still on trail by 7. The trail began with a downhill, which is never as easy as it sounds in the Sierra due to the difficult terrain. Then, after a few miles I began the ascent up Bear Ridge. It is not a pass, but it did ascend about a thousand feet. It wasnt the prettiest climb. The descent, however, was over 2,000 feet- the descent was actually pretty cool, as it turned into a tropical forest with ferns and oak trees. Such a surprise. It spit me out at under 8,000 feet in elevation, which is the lowest Ive been in a long time.

Then, I began the ascent of Silver Pass, which was over 3,000 feet and over 6 miles. I took my time, and took plenty of breaks. The scenery was extremely cool- a water slide on granite, and then you pass a big waterfall. Near the top, there is a lake area thats very pretty. I wasnt dying of exhaustion like I was yesterday, which made it a lot more pleasant.

Near the summit, a saw an older woman with a huge pack walking very slow. I asked her if she was alright, and she said her stomach hurt. I offered her my pepto bismol tablets, and we sat together for a while while she took them and drank some water. I also gave her crackers. She hadnt been able to eat all day, and hadnt slept the last two nights. I was worried, but she has a satellite beacon and said she can hit the emergency button if she needs to. At the top, I talked to another hiker about it and he went down to try to convince her to get off trail at a resort just 8 miles back. When I saw him at camp later, he said she was doing better when he talked to her, and that the tablets seemed to be working. Fortunately, I gave her all my pepto tablets so hopefully she continues to take them and her stomach settles.

Tomorrow, its just 18 miles to Reds Meadow, a resort on trail with laundry, showers, and a restaurant. Also, there are shuttles to mammoth. The total ascent will be only 2,000 feet, so it shouldnt be a hard 18 miles. I got to camp early today, so I plan to wake up early to get there by late afternoon. The group Im hiking with plans to spend the night at Reds at the free camping nearby, and do laundry and shower and eat the restaurant food. Then, take the shuttle into mammoth in the morning. That way, its cheaper. Ill probably do they, but its so tempting to take the shuttle in tomorrow night - I havent read anything about there being vegan food at Reds restaurant. It would be expensive to get a room by myself, but I would really love to get into mammoth and get dinner that I can eat. Ill make the decision tomorrow!