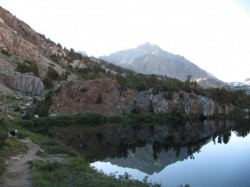 September 3: I had a very bad night. I was confused because I felt like I was suffering from altitude sickness, but I didn’t think that was possible because I was still in good condition from both our CDT hike and the SHR hike that I left only 3 weeks earlier. I slept fitfully all night with a super headache and the feeling that I was going to throw up--I began to worry that I would not be able to go on. The way altitude sickness works with me is that if I sleep on it, I awaken in the morning feeling better; this is what I hoped for.

In the morning, Kerry let me sleep as long as I needed and I did feel better. I decided to eat breakfast with him and just take it one step at a time. We had come so far--a seven hour drive from Oakland, I wasn’t prepared to give up now.

We walked in the cool morning air, passing fishermen and other backpackers as we went, I felt a little winded, probably because of the cold, but otherwise I was doing fine. We reached Bishop Pass early mid morning. There was very little snow now. Three weeks earlier, there had been much snow on the East side of Bishop Pass, now there was none; the only snow was a snowfield right before the top of the pass, I suspect it is deep enough to survive into the beginning of winter. On the west side of the pass, there had been a good sized snowfield that was now reduced to a small patch.

As we walked on we saw, far below us, what we assumed was the Lake below Knapsack Pass. We left the trail and made our way down to it. There we stopped to have lunch and feeling tired again, I fell asleep for an hour. I don’t know what Kerry thought; he has the patience of a saint. About 2:30 p.m. I awoke and he asked me if I wanted to go on. I was sorely tempted to stay where we were; Dusy Lake Basin is beautiful and a lovely place to spend a few days but I thought I was feeling better so I pulled myself together and followed Kerry toward the mountainside. Very slowly we made our way across the lake basin, to where the mountains started to rise toward the pass. I had forgotten how good Kerry is at route finding, and Mr. Cody, once he’s pointed in the right direction, always finds the path of least resistance. It took us a long time, but that gave Kerry time to take lots of photos, which he loves to do, and eventually we reached the top of Knapsack Pass.

We were amazed at the number of wildflowers in evidence--usually by this time of year they are long gone--there were shooting stars (which I think of as heralds of spring!), buckwheat, yarrow, penstemon, asters and heather. At the top of the pass, we paused to look behind from where we came, then to look forward to where we were going--away from the main Sierra Highway of the John Muir Trail.

We decided to hike to one of the Barrett Lakes--clouds were forming to the Northwest and we were a little concerned that we might have a late summer thunderstorm. Having climbed the loose talus on the north side of the pass, we were ready for the talus and larger boulders on the south side. Having done this a few times now, I’m not sure if it’s harder going up or down and I think it depends on the pass. For me, Knapsack Pass was harder going down on the south side; the boulders were large and some were loose. Going up I was only short of breath, while going down I had to pay close attention to the terrain--a misstep would be disastrous.

As we made our way to Barrett Lake, we saw a lone man camped, the only person we would see until we returned to the John Muir Trail. We exchanged a wave of the hand, a salute to a fellow traveler and continued on our way. We continued to the first Barrett Lake and camped on a knoll above it. The ground was very rocky and we felt fortunate to find a sandy spot just big enough to pitch the tent against the potential rain.

I was feeling fine now, I decided the shortness of breath was due to my cold and I felt vindicated, the mountains had made me feel better! I was so happy that Kerry had a chance to see this seldom travelled route--there is nothing like an idyllic place, a lake, the golden light of the sun reflecting off the mountains and leaden clouds shining silver rain in the distance. We were truly alone.