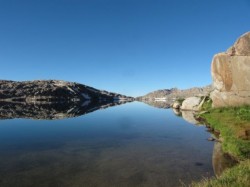 September 4; Last night I dreamt I was killing monsters-undoubtedly my subconscious attacking this tenacious cold! I awoke with a headache that soon dissipated with aspirin and anticipation of our cross-country route.

We arose at 6 a.m., no clouds today and no rain last night despite the wonderfully colorful clouds and rain to the West last evening. There was ice on the ground and the tent this morning, perhaps not too surprising as our elevation was almost 11,500 feet. I was not cold--looking back, I wonder if I had a fever at the time. I was anxious about today’s passes; two and a half of them (an “inconspicuous saddle,” Potluck and Cirque passes). I wonder what makes a saddle different from a pass--they both look like the shoulder of mountain to me. I was concerned about moving too slowly for Kerry, but I had more energy today and we made good progress. We weren’t in a hurry and had plenty of time to enjoy the vast openess around us.

Waking up at Lake Barrett, we had breakfast and coffee (a treat we usually forgo to conserve fuel) and while we sat there a hummingbird flew right up to us and hovered near the ice-covered tent. A thoughtful person might glean some meaning in this, for me it was just a special moment; we stood transfixed briefly, the bird, the two of us and the dog--all belonging somehow to the moment. Breakfast over, we made our way around the lake and then on to the middle and largest of the Barrett Lakes. The terrain was very rough; many large boulders that you couldn’t see around and therefore we never knew when we’d reach a route that was treacherous to continue. We made several promising starts only to find they ended in cliffs requiring us to back track or change direction, but that was part of the intrigue--looking across a valley and deciding on a route, only to veer off because of unforseen obstacles, steep rocks, cliff-rocks or icy snow.

Past the Barrett Lakes, the climb up the “inconspicuous saddle” was not so inconspicuous as the saddle itself (i.e. it was hard work!) but the sky was blue, the air was cool and we had the world to ourselves. On the other side of the saddle, we made our way down across the high alpine treeless landscape and up toward Potluck Pass--it was not so difficult as I feared but as I found frequently, going down seemed much more difficult than going up. The surface on the south side of the pass was steep and mostly scree creating an ever present challenge to keep from gaining unwanted momentum to slide uncontrolled to the rocks below. Cody, again was helpful here, picking out his own primitive switchbacks which seemed to work well for all of us.

At the bottom, we came to a small lake around which we negotiated our way through a small amount of melting and potentially precarious snow and on to the next lake, below North Palisade Peak. Amphitheatre Lake was quite a bit larger than the Barrett Lakes and it was stunningly beautiful. How many alpine lakes must I see before they stop affecting me this way? The water was so clear we could see boulders reaching down into its aquamarine depths, icy and cold. All around us the stark landscape framed the solitude of this place. What I love about the Sierra Nevada, like so many before me, is the golden light; it makes ordinary granite reflect a warmth that it doesn’t possess and imparts a dreamlike quality to the land that is magical--anything is possible here.

From here we made our way up to Cirque Pass; more talus and boulders and occasional creases in the land that we had learned to follow. About half way up, Kerry stopped me and pointed up--sitting on a rock a lone bird was so still, it might have been a rock. We thought it might be protecting a nest nearby, but I later learned it was a rock ptarmigan, whether the moniker was a result of it’s stillness or it’s habitat I don’t know.

At Cirque Pass, we rested and ate lunch; the way down was steep and not obvious--first we headed down to some lakes we could see steeply below us; Roper’s instructions were clear, although the path was not. Again, we set off in one general direction only to realise that another direction might work better--it was a process. The most difficult path of the descent came at the end, the final 300 feet or so to near Palisade Lake on the John Muir Trail. We would follow a grassy ledge only to find it terminated in a steep drop to the next grassy ledge. There were several places we descended that were a little more challenging than I would have liked, but in the end we saw the JMT tantalizingly close and still a long way below us. I looked at the sheer walls from whence I came and I found myself wondering how we would have fared going the other direction (northbound)--the route was not obvious and the vertical look of it was daunting.

As we descended, we began to approach a creek (Palisade?) that runs into Palisade Lake and crossing the wet granite gave us a new challenge, but with the water and earth came more wildflowers and the land became more meadow-like. Just before our final descent to the JMT, we passed a large idyllic tarn that was completely hidden from anyone below us--I thought it would be a good camping place for anyone wishing to stay out of sight.

Before we knew it, we were back on the John Muir Trail, finishing the first section of the Sierra High Route; for me--a small but significant accomplishment. Back on a trail, the walking was incredibly easy--this on what is a rough section of the JMT; a great deal of scree and granite to walk on. However, after the desolate route we had just completed, we had a sincere appreciation of what it took to create this wayfare through the mountains.

We hiked down the Golden Staircase, enjoying the magnificant views of the valley north toward the King’s River until we reached the tree line. There we stopped at a campsite next to Palisade Creek. We could have hiked on, but we had had a great day and now was a good time to eat and rest.

That evening Kerry read to me from “the Last Season” and I was glad that he had not read this section before we had climbed down those granite shelves. In the book the author describes the rangers finding the mangled and frequently, unrecognizable bodies of those unfortunate enough to meet with accidents by falling from the granite. I was thinking about those rocks, so alluring, calling us on and I was reminded of the Siren songs of old, calling the sailors to their deaths on those other rocks on distant shores; a reminder to be careful and respectful of the hazards!

Today was a great day. I had suffered from some shortness of breath but I assumed that it was just the remnants of my cold.

Tonight, we would all sleep well!