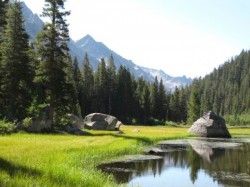 September 5: We walked the 3 1/2 to 4 miles down the canyon to the junction where Palisades Creek runs into King’s River and its Middle Fork joins from the north. It was mostly down hill so it should have been an easy walk but for some reason my muscles felt sore, not from climbing, but I felt like they were tired from too little oxygen. It was a lovely morning and we were treated to numerous deer sightings. Mr. Cody was a perfect gentleman, sniffing the air and I feel certain he was considering his options. He has definitely grown up and I know he understands now that chasing wild animals is not acceptable. I believe he saves these experiences up for his dreams, as I have frequently observed his paws paddling the air as though running in pursuit, while excited little whimpering noises escape from his throat. He has an entire other life in his dreams.

At the Kings River junction we sat down for a brief rest and as we were munching on some dried fruit a couple of guys came from the south on the Kings River trail. They stopped to talk and it developed that they had started several days earlier on the Sierra High Route from Kings Canyon, as the boys and I had back in August. They were from Tupelo, Mississippi and they had left the High Route when they reached the State Lakes trail. Apparently the older of the two, Calvin, had succumbed to altitude sickness and consequently, they had stayed on trails from that point. I recalled that we walked the State Lakes Trail the second day of our hike, so they had not got very far before giving up their plan. They had scheduled themselves to hike 15 miles a day, which I think is a bit ambitious for ordinary mortals starting out--we might work up to that, and a young extremely fit person might do it. I realized that our CDT cross country hiking, which is mostly a route finding challenge, bears no resemblance to the SHR where route finding is difficult but minor compared to fairly strenuous mountain climbing, which takes time.

These two men were heading off the trail at Bishop Pass as we were and we leap frogged them all the way to South Lake. From the Kings River Junction, we hiked the 3 1/2 miles up to Le Conte Ranger Station, where the missing Randy Morgenson had frequently served as back country ranger in the 70's until his death in 1996; there we headed up the Dusy Basin Trail. This is a fairly steep canyon to climb out of, but it wasn’t too warm and the time passed quickly. I was surprised when I started to feel ill, and the higher we rose, the sicker I felt. When at last we arrived at Dusy Lake Basin, I laid down on the first flat rock I came to and fell asleep. This is a classic altitude sickness symptom, but I couldn’t believe that was my problem-- I had hiked most of the summer over much more strenuous routes. Kerry again let me sleep for an hour until the two Mississippi hikers, Calvin and Brian, passed us. I woke up and tried to be companionable, but I really didn’t feel well. I had hoped that we might go over Bishop Pass today, but it was evident that I was too sick. We walked on, I struggled for a couple more miles and then we stopped for the day.

We were concerned that rain might come and had only soup for dinner. I was too sick to eat anything else, and that was all we had because I had accidentally taken out too much food at the trailhead when our trip plan changed. Kerry, my long suffering mate, took all of this in stride--he would make it up to himself tomorrow with a good lunch. After dinner, he read me some more from “the Last Season”; it was a riveting story and sick as I was, I was content to lay and listen to the tale unfold. With darkness, I drifted easily into a long night’s sleep and when I awoke in the night, Kerry and dog were sleeping soundly beside me. The rain did not come.