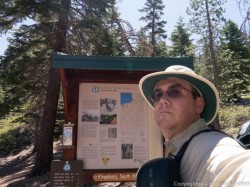 I packed my stuff up in my car and made sure nothing was left in the SUV in plain sight since the vehicle was about to be left for 8 to 10 days. I got moving around 10:45am. I'm carrying 3L of water and enough food to almost get me to Tahoe City. I'll supplement what I'm lacking at the store at Echo Lake. I can feel the weight of it all and the high altitude isn't helping. I do live near sea level afterall.

To start off, I have to climb 0.5 miles of extra trail from the southern trailhead at Kingsbury Grade to join with the actual TRT. So this extra non-TRT mileage isn't included in the official mileage hiked listed as hiked. Once I joined the TRT, the trail continued to climb before dropping into Mott Canyon after joining a dirt road. I didn't see any water in Dagget or Mott creek on the way. When the trail left the road again, I stopped for a lunch break. The trail then started a small climb up to Monument Pass and then started a longer climb to Freel Pass. During the climb, I reached Star Lake around 4pm and took a long break while filling up with enough water to last me until tomorrow. There are several backpackers here and most look like they are done for the day, though I don't see many tents setup yet. I don't know if any are trying to do the entire trail as we all stayed to ourselves.

My goal for the day was to get over Armstrong Pass so I continued the climb up Freel Pass. At the top was a little snow and a cold wind so I didn't stop for a break. On the switchbacks coming down I ran into a very fit backpacker going the other way. Shortly after reaching the bottom, I go through Armstrong Pass. I originally thought I'd have to climb up to it rather then descend. I continued on another 1.5 miles before finding a campsite as it turned dark. I setup a cowboy camp in between some trees and laid down. Shortly a hiker came along via headlamp. He would stop occasionally and make a loud noise. I'm assuming he is trying to find a friend he seperated from. Given that I hadn't seen anyone as I hiked in the other direction in awhile, he may have already passed their campsite. Either that or I just didn't notice them camped far off the trail.

My body hurts and is very tired. I definitely pushed too hard for my first day out. A cold wind blew all night causing my sore legs to cramp up some.

Most of the views were to the valley to the East in Nevada which looks mostly like ranch land with a little agriculture. Towards the end of the day, I finally got a few short views of the end of Lake Tahoe. I encountered several mountain bikers today which will take some getting use to. I had forgotten that bikes are allowed on large portions of the TRT and have seen more of them then hikers so far.