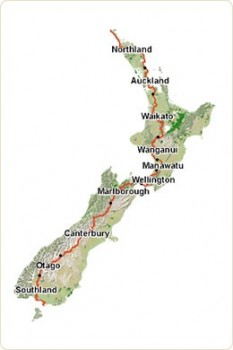 
The decision to hike the TeAraroa was really set in stone on September 30th at midnight, when ski passes were no longer on sale, and I hadn't bought one. And so it goes, I bought a plane ticket to New Zealand....

Truthfully though, it has been a very long tough year for me, and I've realized the one thing thats going to make me better is hiking, thru-hiking. It is when I am walking (walking nonstop) that my mind is the clearest, my body feels its best, and I am at peace. I chose the TeAraroa trail after stumbling across some videos, (actually while researching the CDT) and the hiking time frame works out with my seasonal position in Glacier Park, plus New Zealand looks amazing! My original plan was to hike the Continental Divide Trail the summer of 2012, but realizing how much I love my job in Glacier, I've decided not to give it up yet. So, the CDT is put on hold and the TeAraroa, the Long Pathway across New Zealand, will be my next thru-hike.

With three weeks to go until I land in Auckland, I have been very busy. Putting together spreadsheets of the track notes and making a resupply guide, so that I'm not carrying many lbs of paper. This was incredibly time consuming and I did it with Buck 30's help, but its going to save a lot of energy and hopefully confusion while out on the trail.

I've been tweaking with my gear, making a few changes from what I carried on the PCT-amping up my rain gear for sure. Right now my base weight (no food or water) stands at 11.5 lbs, however I'm planning on adding a bunch of video camera equipment in hopes to paste this whole thing together at the end, and produce a film. So that would probably put my base weight between 14 and 15 lbs, yikes!

On the PCT in 09, I was Annie until Washington, then became little jerry. I'm meeting Buck 30, who I hiked ~1000 miles with on the PCT, in Auckland, and we plan to hike the TeAraroa together. I am happy he decided to hike this trail because I'm a terrible stream crosser and they look pretty intense in NZ. Also the maps don't all connect, the trail is not done, and I know I'm going to be lost a lot, so it will be nice to be lost with another person-and he's entertaining as hell. I also hope to meet up with Heaps (PCT 09) somewhere around Auckland.

With that, I will end with my goals- the same three I had for the PCT.
1. Complete the trail, connecting my footsteps the whole way
2. Meet new people
3. Have fun