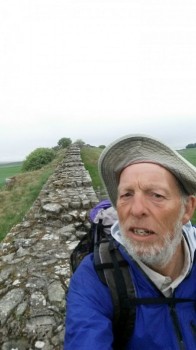 Not a lot to talk about today. I was awake early but rather than disturb my other bunkmates, I played with the phone and finished and sent off yesterday's journal entry. Because packing involves a lot of plastic bag rustling, after I did get up I took everything loosely tossed in the backpack downstairs to the kitchen. Here I made myself some tea and packed everything properly. One of the bunkmates joined me so I started chatting with him while we both ate breakfast. I really wasn't in a hurry as it was 14 miles to Byrness where I'll be staying tonight when I meet up with Howard again.

In the end I left just after 7:00 and it was still dry outside. But that didn't last long and soon I was putting on the raingear. It never really rained hard all day but it was on and off rain/drizzle so I never considered taking the raingear off. Soon I was crossing this enormous moor that was part of the Northumberland National Park. There were lots of names of commons and fells but which ones I was actually on was a little unclear from the map. It was all gentle moor hiking and not very soggy except in one area where there was another long line of flagstones. This was one time where I wouldn't have cared about wet ground because my feet were quickly soaked from the rain on the overgrowing heather.
After the moor was another large forest. I was studying the trees and they looked to me very similar to Douglas Fir trees but later I was told they were Spruce trees. The forest is all a large commercial operation with some areas clear cut, new trees planted in others and mature trees in the rest. The trail here was mostly a gravel road but there were a couple of places where it went through a part of the forest. I could have just stayed on the road but the forest trails were much easier on the feet and I took every opportunity to go on them. Finally, after a nice walk along the River Rede, I was in Byrness at the B&B booked by Howard. It was only 1:30 pm but the host was very kind to let me sit in the conservatory and make myself a cup of tea. One of the hiking gang was there taking a rest day to nurse a slight leg injury and we chatted for a couple of hours. There was also a drying room so I got my wet boots and socks in there as quick as possible. Four more of the hiking gang showed up later as did Howard and his sister Geraldine who had driven up from Shropshire. We all had a nice dinner and a few good ales at the B&B since it was the only place in the small village.
With the wet weather I never took the camera out today but that was in part because I never saw anything that seemed worth photographing. The moor, forest and farmland were all very typical. So I've taken the liberty of adding a few more pictures from yesterday's walk along Hadrian's Wall.