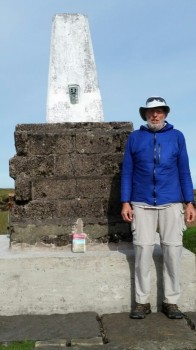 Me at the Cheviot Summit

The wind abated during the night although we both slept so well we never noticed it until the morning. We stirred around 6:30 am making this the longest night I can remember in a tent. It was pretty cold and there was a heavy dew making the tents rather wet but we didn't really care because the sky was blue and the rain belt had passed through. We packed up and started walking at 7:30 am and this was about the first time we felt good about staying in the hills overnight. We knew the hikers that went back to B&Bs would have a later start and a long climb to get back into the Cheviots.

Within a few minutes we reached the point where the trail that went to the summit of The Cheviot branched off. I think this was an optional part but both of us wanted to do it even though it was an up and back to this same point as opposed to an alternate route. The trail was almost all flagstones and had to be the easiest hill to summit ever. I think we went up about 200 feet in a mile and a quarter. Not unexpectedly there was a very nice flat section with short grass that would have been a perfect camping spot apart from it being unprotected from last night's wind. The top was a trifle anticlimactic especially when the monument at the summit was just a breezeblock base with a survey marker on it. Nevertheless we took pictures to mark the occasion.
Back on the main trail, we stopped at the shelter that I was thinking might be our fallback if we couldn't find a campsite last night. It would have been fine as it had enough room for at least four people to sleep on the floor. Then we climbed up a hill called The Schil where again we had some lovely views of the Cheviots. The trail continued to follow the border fence and as yesterday was mostly on the English side until it made a sharp left turn and we were in Scotland for the duration. Soon after we came to another long distance trail, at least sort of long distance at 63 miles. It was called St Cuthbert's Way which runs from Melrose in the Scottish Borders to Holy Island on the Northumbrian coast. The Holy Island of Lindisfarne is where Howard's sister went visiting while we were hiking.
Two miles later we were in Kirk Yetholm, the end of the Pennine Way. I touched the wall at the Border pub and took pictures below the big sign. In the pub I signed the visitor book, received my certificate and got a traditional free half point of beer. We sat outside the pub in the glorious sunshine and after a couple of hours the rest of the gang came dribbling in and there were lots of high fives and celebrations. That night we all went for dinner at the Border pub and had a very nice evening before saying our goodbyes.
So that is the end of this adventure. I will write another entry summarizing the Pennine Way. I am over a week ahead of schedule so I plan to rent a car and go for a tour of Scotland before going south to Gatwick to meet up with my wife Ann for a "real vacation".