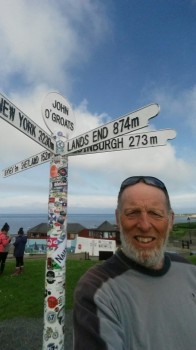 Me at John O'Groats

Like the other two trails, the Pennine Way had some splendid sections, in particular the South River Tyne and High Cup. I really enjoyed walking over the moors but that likely is because they are new to me. I suspect if there were no other choice they might get a little old after a while. Beforehand, I thought the Pennine Way was going to be the hardest of the three trails because of all the old stories/fables about crossing the bogs knee deep in peat mud. As it turned out, the authorities have taken the bite out of that challenge by laying miles of flagstones end to end and creating a sort of "highway in the sky". I think the number of people walking this trail and each one trying to find dry ground around the bogs was causing so much damage that they really had no choice. And don't get me wrong, I wasn't looking forward to "bog trotting" as they called it and I appreciated all the work and logistics that had to be involved in laying all those heavy stones. But, because of that I thought the Pennine Way was rather tame compared to the Lake District part of the Coast to Coast and the many "steep and deep" canyons on the South West Coastal. I really enjoyed it despite that impression and particularly the last week when I met up with that group of other hikers who were a lot of fun to be around. It was a shame that John missed the whole experience with his knee problem and Howard missed the middle two thirds with his feet blisters.

A few people asked me which was the best trail and that's a difficult question to answer because they all have their own unique characteristics. I enjoyed them all so I'll leave it at that. I do think the South West Coastal was the hardest and that was a surprise as I expected the higher ground of the hills further north of the country to be the toughest. Some of the hikers I'd met who had also done this trail all said the same. It certainly changed my opinion of coastal hiking.

What is in store for next year at the moment I have no idea. Interestingly, this year's adventure took me over 10,000 miles since I started the PCT nine years ago. Who would have thought that?

At the moment I'm touring Scotland in a rental car and enjoying some of the absolutely wonderful scenery in the Highlands. And it really is spectacular, especially the north and west highlands. I've included some pictures so you can see what I mean. Tomorrow I'm planning on walking up Ben Nevis, the highest point in the UK although the weather forecast doesn't look too promising. I'm also going to get the ferry over to the Isle of Islay and go on a distillery tour to see how they make single malt scotch. Then I make my way south to pick up Ann from Gatwick so we can have a "normal" vacation for a couple of weeks.

As always, thanks for all your comments and encouragement. Until next time ...