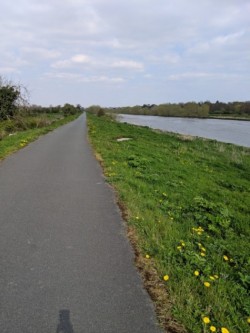 River Dee and towpath looking back to Chester

ByGetting to Chester from LA involved two flights and three train rides so it was a journey fraught with risk. I did allow a four hour window to get from Heathrow to Euston Station for the final leg. That was pretty generous if everything was on time. But my flights all got changed for reasons that I think were the consequence of the Boeing Max 8 debacle. Although it lost me 30 minutes of margin, it was an ok change because I didn't need to get up so early and it avoided a three hour layover in North Carolina. But it did have a rather sporty connection at Dallas/Fort Worth of only 50 minutes with a terminal change. I wasn't too worried about that since I didn't check any bags. I made it OK but the plane was fully loaded by the time I got to the gate. Then, as we were backing out, the pilot came on the intercom to tell us a warning light had come on and we needed to go back to the gate for maintenance to look at it. Eventually we left 90 minutes late so my margin had been cut in half. I got through immigration in five minutes but just missed the train to Paddington so I had to wait 15 minutes for the next one. The "Tube" to Euston was quite quick so I ended up at Euston station with nearly an hour to spare. The Chester train was excellent, getting there in two hours and flying along at 125 mph. It's hard to understand the business model for ticket prices on British trains. If you buy the ticket well in advance, it is very reasonable but if you leave it to the last minute, then it's quite expensive. Picking a non-peak time as I did also helps a lot. In fact it was so reasonable I treated myself to first class and it was well worth the little extra.

After getting some tent stakes, food and money in Chester, I set off to find the start of the Wales Coastal Path. To get there I had a couple of miles to walk on a towpath beside the River Dee. Not the nicest of trails being tarmac but not difficult to navigate either as it was dead straight. At the Welsh border I took a photo of the river and towpath looking back to Chester. Then I did a selfie at the welcome to Wales sign which, despite the absence of any other signage was the start of the Wales coastal path. This sign like every other one in Wales has an English version and a Welsh version. Just in case you didn't know, Wales has its own language that is still very common except in the heavily industrial south. The language in my view bears very little in common with English and it seems like one in which vowels are optional. Many of the place names have some extraordinary spelling and incomprehensible pronunciation. I think it's wonderful that this language had survived and I'll do my best to spell all the place names accurately.

The start of the official trail was another five miles of the same towpath. The river itself was completely straight, unlike any natural river I've ever seen. Later in the afternoon I saw an information sign that explained the original river to Chester was a mile further north but it was getting silted to the point the bigger ships couldn't get to Chester so they were switching allegiance to Liverpool. To rescue Chester, although too little too late, they appropriated the canal and created this straight river. Later, I saw some fisherman who told me they were trying to catch salmon in the river.

Then, after a mix of road and off road walking, I came upon the first sign for the trail and I took a picture. Later, I also saw a much smaller version, about the size of a half dollar, buried in the concrete. These will take some spotting I thought to myself.

I was in the county of Flintshire and went through Connah's Quay and then into Flint, presumably the county seat. By then I was starting to feel the fatigue of being up for 27 hours so I looked for somewhere to stay. No luck because the one hotel was full and the one B&B didn't answer the phone. I did come across the ruins of a castle in Flint but I didn't pay much attention to it as I was really looking for somewhere to camp the night. A little later I found a secluded spot and I was asleep almost instantly after climbing into the sleeping bag. Not a bad start walking about 15 miles on the first afternoon.