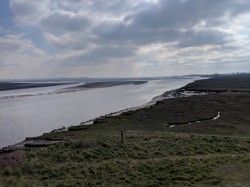 Dee Estuary with Tide Out

Although I slept quite well, it got really cold and when I did wake up I was wishing I had put more on last night. When dawn broke, I ventured a hand out of my sleeping bag and touched the inside of the tent to see if there was much condensation only to find the condensation had frozen and I was scraping ice off. Outside the grass was covered in frost - it's no wonder I was cold in the night.

On the way out of Flint I asked a local dog walker if there was somewhere to get breakfast in the direction I was going. He said the only possibility was a food van that stops in the industrial area of the next village of Bagillt. When I got close I saw another dog walker and asked him the same question - I think I'm following Theresa May's approach of keep asking the same question in the hope of getting a different answer. But I was successful, unlike the British prime Minister, and he told me a about a cafe tucked behind the local pub. It was a great place and I could choose from either the breakfast or lunch menu. It also had good WiFi so I could post the last journal.

This morning, with my mind a little clearer from the jet lag, I came to realize that I have been calling this trail the Wales Coastal Path when in reality it is actually called the Wales Coast Path. I'm not going back to correct past mistakes, but from now on I'll refer to it correctly as the the coast path. I also came upon what I think is going to be a common occurrence which is the icon for the Wales Coast Path. It's a dragon with a fire basket, see picture as my description doesn't quite do it justice.

In one section that was the edge of a field, I came across two very young foals. They weren't Welsh ponies but I was able to creep up quite close for some pictures and I've included one of them. What it doesn't show are the two mothers keeping a very watchful and protectful eye on me. They were funny to watch as they were both inquisitive and fearful as I crept closer.

The coast path followed the edge of the Dee estuary which by now had grown to a mile or more wide sand bank with the tide out - see picture looking back towards Chester. But there were a number of old inlets that were docks or small harbors supporting the industrial enterprises. Now they are all abandoned but getting across a 100 foot inlet involved a quarter of a mile trek inland to cross the railway line and then to the road where there is a bridge and then a similar trek back to the estuary coastline. They certainly added a few more miles. At one of these inlets, in a dry dock, was an old steamer called The Duke of Lancaster. There was a couple of signs referring to pirates and the Bahamas but I never figured out their significance although there were signs indicating there is a book about it all available on Amazon.

Later on the tide has come in and the now several mile wide estuary was full of water - see picture. By then I was at the end of the Dee River and it's estuary. It's industrial past has been evident but also indicative of "progress". Now there are just abandoned relics of the past but on the good side it has all become a massive nature preserve with hundreds of species recovering and abundant.

I did get treated to several miles of beach walking but that wasn't too bad as the tide had just turned and there was nice hard and wet sand strip to walk on. Then there were several miles in the sand dunes which was a little harder as the sand was quite soft in places. All this led me to the small resort of Prestatyn from which there was a couple more miles walking along the sea wall to Rhyl. By then I was getting quite tired and there was clearly no camping opportunities except maybe the golf course so I used Google to find places and easily got a sea front hotel room in Rhyl forthe night.