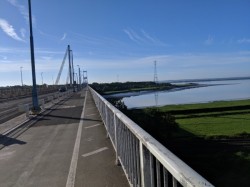 Bridge over the Wye

I left Chepstow just after 7:00 am and took the direct route rather than the circuitous Wales Coast path one I used yesterday. I crossed under the M48 motorway and then turned immediately onto the slip road that took me to the walking/cycling lane of the Severn Bridge. Actually, as you'll see in the first picture, there are two bridges. The first crosses the River Wye just above the point where the estuary splits into the Wye and Severn rivers. Halfway across was a small post showing "Glouc" on one side indicating the English county of Gloucestershire and Wales (see picture) on the other. This was my last step in Wales on this trip and the rest will all be in England.

The second bridge is the much longer Severn Bridge I talked about yesterday. I took a selfie about halfway across to show it's a true suspension bridge. My most memorable feature was how much it vibrated when vehicles went by. It was quite a relief to get to the end and terra firma. Then I turned right and after a short road walk through the small community of Aust, picked up the trail called the Severn Way. This followed the coastline for about nine miles on surfaces that ranged from hard top to overgrown weeds waist high. I didn't actually mind the weeds too much because the alternative at that point was a very busy major road that serviced the Bristol Dock and surrounding industrial area and about half the vehicles were big trucks. The only annoyance was the stinging nettles, the ones that cause a rash as soon as you brush by their leaves. They seemed to be able to get me despite long pants. The last part was along the combined cycling and walking path beside this road and that was not particularly pleasant with all of the truck noise and very heavy traffic.

Then I made my way up to another motorway bridge, this time the M5 crossing the River Avon. This is the river that goes through the city of Bristol and has the famous Clifton Suspension Bridge designed by Isambard Kingdom Brunel, a famous engineer and architect like Telford and namesake of the University where I did my undergraduate studies a long time ago. I took the short way rather than going all the way into Bristol and then out again just to cross the river.

I headed off in the direction of Portishead passing several massive parking lots with imported new cars, presumably unloaded at the nearby docks. I also went through a Nature Reserve and saw a pair of swans with a gaggle of baby swans - see picture. At Portishead I went down close to the water where I picked up a coastal trail that went all the way to Clevedon. This was mostly a dirt trail, quite narrow in places and a tad overgrown. But again it beat the alternative of a road walk. As you have probably guessed, there isn't a single trail covering this section and I'm pretty much making one up on the fly.

In the evening I met another engineer who came over to the US at the same time I did but he went back after four years. We haven't seen each other for 36 years but since he lived in Portishead I called him a day or so back and suggested we get together. He picked me up at the B&B in Clevedon and we went to a pub for dinner. We chatted at length about all the folks we jointly remembered and had a great time. Then we went to one of his daughter's house and finished the evening there before he drove me back. A really nice end to a long and noisy day.